The Kashmir Press Club, founded in 2018, was the largest body of independent reporters in a region. 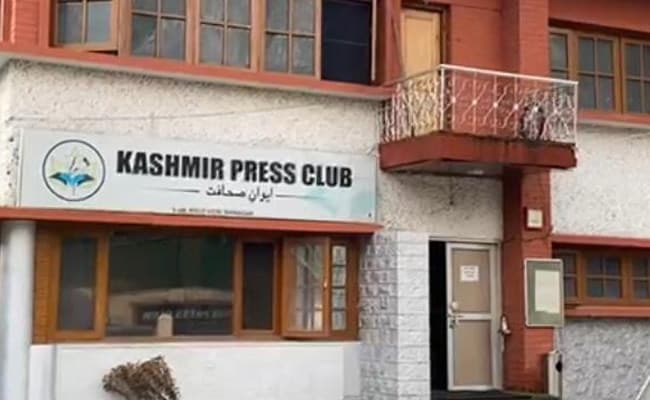 The Guild's statement also focused on eroding media freedom in the region.

The Editors Guild of India in a statement today said that it is "deeply anguished" by the shutting down of the Kashmir Press Club, the biggest journalist body in the Kashmir valley, adding that it sets "a dangerous precedent" for media freedom. The top editors' body had earlier expressed strong reservation at the events during the weekend when the premises were forcibly taken over by a group of journalists with the help of armed policemen. Many termed it a coup.

The administration of the union territory of Kashmir has announced that the Kashmir Press Club has ceased to exist - it has lost its registration as a society, and its land has been reclaimed by the government.

"The shutting down of the club is the latest act in a sequence of disturbing events, wherein the 're-registration' of the Club was first arbitrarily put 'in abeyance' by the Registrar of Societies on January 14th, followed by the shocking breach of institutional norms when a group of people, with the active support of state police and CRPF, took over the office and management of the Club on January 15th," the Editors Guild of India said.

The Editors Guild of India is deeply anguished by the shutting down of the Kashmir Press Club, following a disturbing sequence of events- an armed takeover of the Club with the aid of state police, and its “re-registration" being earlier put "in abeyance".#KashmirPressClubpic.twitter.com/rhXyUWAn6h

The Guild has demanded that the status quo before the January 14th order of Registrar of Societies be restored with respect to the functioning of the Club and that "the state works towards building and protecting the space for a free press".

Omar Abdullah, former Chief Minister of the erstwhile state of Jammu and Kashmir, had called it a "state-sponsored coup".

The Kashmir Press Club, founded in 2018, was the largest body of independent reporters in a region where the freedom of the press has been steadily eroding. A year after Jammu and Kashmir was declared no longer a state, and its special status and autonomy were removed, the club was asked to register anew as a society. That process was completed in December but suddenly, two weeks ago, the new registration was put on hold with the government claiming that the Criminal Investigation Department (CID) of police had given adverse reports about the character and antecedents of those on the governing body of the club.

The Guild's statement also focused on eroding media freedom in the region that has often seen violent conflicts and various restrictions imposed by the government. "Space for media freedom and active civil society has been steadily eroding in the region. Journalists frequently face intimidation from terror groups as well as the state. They are also charged under heavy penal laws and are routinely detained by security forces for reporting or for their editorials," it said.

Citing a number of cases and "excesses" against journalists in the valley, the statement calls the Kashmir Press Club "an important institution for fighting for the protection and rights of journalists".

The club had remained open through the lockdown, giving journalists access to important facilities like the internet for filing their work, as well as workshops for training young journalists.