The Sena has asked that the BJP leadership give a written assurance that there would be a rotational arrangement for chief ministership. 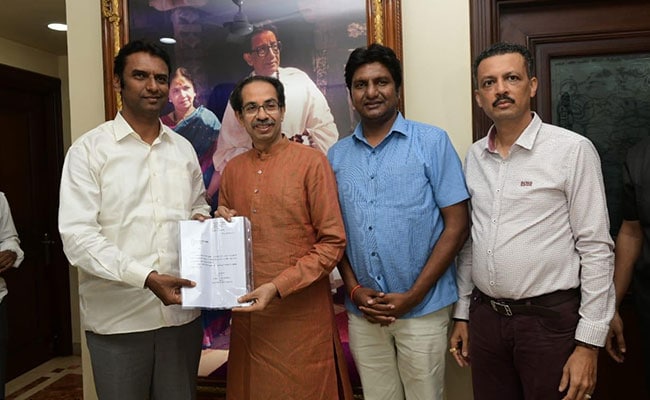 Shankarrao Gadakh, the MLA from Nevasa, met Uddhav Thackeray to announce his support

A fifth Independent MLA today extended support to the Shiv Sena, bringing up the party's tally to 61, sources say. The Sena had won 56 seats in the recently concluded assembly elections n Maharashtra. The upward movement of numbers is expected to lend power to its demand for a 50:50 division for a turn at the Chief Minister's post, over which a bitter tussle is on with ally BJP.

Earlier, four of the 15 Independent candidates had declared support for Shiv Sena. Today, Shankarrao Gadakh, the MLA from Nevasa constituency, met Uddhav Thackeray at Matoshree, his Mumbai residence, to announce his support.

"I represent a rural area where problems are more complicated. If I have to solve people''s issues, it is better to stay with the party which is going to form the government. Hence, I visited Mumbai today and extended support to the Sena," Mr Gadakh was quoted as saying by news agency Press Trust of India.

Since the counting of votes on Thursday, the Sena has claimed that a deal for a 50:50 division was agreed upon during Mr Thackeray's meeting with BJP chief Amit Shah ahead of the Lok Sabha elections.

The Sena has asked that the BJP leadership give a written assurance that there would be a rotational arrangement for chief ministership. The party has also refused to drop the demand, even though the BJP made it clear that it would not agree to a rotational system for the top post.

Earlier today, senior Sena leader Sanjay Raut appeared to issue a warning to the BJP, saying while the party was willing to wait for the BJP, they cannot "deny the possibility (of taking Congress-NCP support)".

"No one is a sadhu-sant (saint) in politics, though the Sena still believes in its principles," Mr Raut added after the party separately met the Governor. The BJP too met the Governor no its own -- both sets of meetings being described by the parties as "courtesy calls" on the occasion of Diwali.

Chief Minister Devendra Fadnavis, meanwhile, said that he was in touch will all 15 Independent candidates - a claim that was seen as the BJP's search for options.

Asked what happens if the BJP refuses to agree to the Sena's demand for Chief Ministership for 2.5 years, Mr Raut said, "If they can do without the Sena, I welcome that and congratulate them".