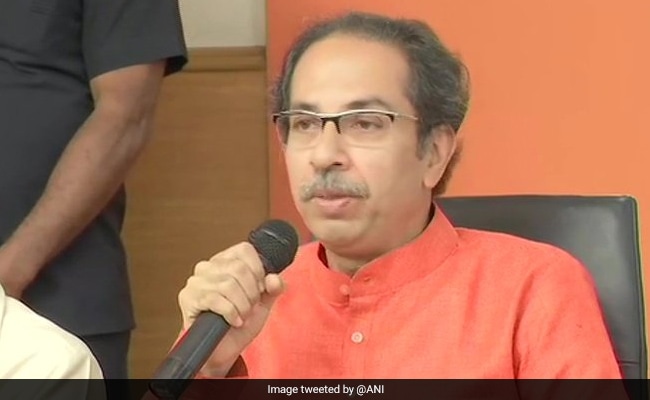 The Shiv Sena said that a Mumbaikar Marathi woman could understand the pain of Kashmiris.

The Shiv Sena, in its mouthpiece Saamana, today backed the woman who displayed "Free Kashmir" placard during the Sunday protest in Mumbai against the mob violence at Delhi's Jawaharlal Nehru University.

"A Mumbaikar Marathi woman could understand the pain of Kashmiris. The opposition feels this is sedition. There can't be a dirtier example of irresponsibility," the Saamana editorial said.

"If the opposition and its supporters feel expressing yourself fearlessly is sedition, it is not good for them (opposition) and the country. The opposition has fallen flat on its face after the woman's clarification," the Marathi publication added.

"They attacked Chief Minister Thackeray and asked how this anti-national activity can happen right under his nose. The allegation was so frivolous that the opposition leaders made a mockery of themselves," the Shiv Sena tauntingly said.

The Shiv Sena, in power in Maharashtra at the head of an alliance including the Congress and the NCP, was criticised over the poster by BJP leader and former Chief Minister Devendra Fadnavis on Monday.

"Protest is for what exactly? Why slogans of 'Free Kashmir'? How can we tolerate such separatist elements in Mumbai? Uddhav-ji, are you going to tolerate this Free Kashmir Anti India campaign right under your nose???" Mr Fadnavis had said in a tweet.

The woman, Mehak Prabhu, who is in the centre of the controversy, on Tuesday, clarified that by holding "Free Kashmir" poster, she had "no ulterior motive" and only meant to highlight the restrictions imposed in Jammu and Kashmir.

"At around 7 pm yesterday, I reached where the protest was happening at the Gateway of India. Like anybody else who believes in democracy, I also joined that protest. We were standing for justice to the Jawahar Lal Nehru University students," the woman said in a video posted on Facebook.

"I saw a bunch of people who were painting placards on every issue like NRC, CAA and for JNU students. There was a placard lying on the side which said "Free Kashmir". The first thing which came to my mind when I saw that placard was about the basic constitutional rights of Kashmiris," she said, adding that she is not a Kashmiri and was brought up in Mumbai.

She also went on to say the controversy surrounding the poster had been "blown out of proportion" and that as a woman she now feared for her safety.

Yesterday Sena Leader Aaditya Thackeray had said that one needs to see her intent.

"Apart from that incident (we need to) look at larger picture... we need to see her intent. Was it to remove internet blockade? If it was to free Kashmir from India, then it is wrong. Obviously everyone condemned it... not even other protesters supported it," the newly sworn-in Environment and Tourism Minister said.

Jammu and Kashmir is facing a prolonged internet shutdown that has been in place since Article 370 was revoked in August last year and the state was bifurcated into two union territories.

Hundreds had gathered at the Gateway of India on Sunday night in what was described as a "spontaneous" protest against brutal attack in Jawahar Lal Nehru University when a masked mob, armed with iron rods and sledgehammers, attacked students and faculty members and left 34 people injured.