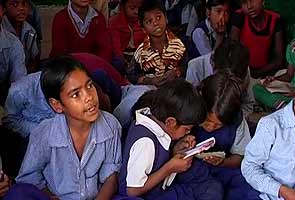 New Delhi: A nationwide survey on status of education in rural India has revealed that there has been a decline in the education standards across the country. The Annual Status of Education Report (Rural) 2012, prepared by NGO Pratham and released by Union HRD Minister MM Pallam Raju on Thursday, also raises questions about whether the Right to Education Act has actually led to any improvement in India's literacy. (Watch - Study says learning levels in govt schools declining: Right to Education to be blamed?)

According to the in the report, the basic learning levels of children in rural India have fallen; in 2012, just five out of 10 students in Class V across rural India, could solve a simple arithmetic problem, it says.

The report also says that there is a sharp decline in the reading ability of children, especially in government schools and that more and more parents seem to be depending on private schools in rural India. Last year, 45 per cent of students enrolled in Class I-VIII were attending private schools, the report says.

And in the same year, the enrollment rate of girls in schools showed a decline in a few states, the report says.

The report was based on a survey carried out in rural schools across 567 districts and covering about six lakh children in the age of 3-16.

Mr Raju said he was worried about the figures and hoped things will be better from next year. The minister also said, "We have been spending a lot of money on improving the reach of schools. All these are interventions. We are not unduly alarmed by parents sending their children to private schools, want to focus on improving standards in government schools."

The report is one of its kind in India as no other survey has been done so far to identify the status of education across rural India, either by the government or a private entity. Dr Rukmini Banerji, in-charge of the Pratham survey, said, "It's how you look at the way forward. The last couple of years have seen a big decline and that is very worrying. We have spent many years getting our children into school, now it is time to see what we learn from them."

Criticising the Right to Education Act (RTE), the report said it may have led to relaxation of classroom teachings since examinations and assessments are scrapped till a few classes.

The HRD Minister, however, defended the RTE act saying the focus since the introduction of the act has been on capacity and on getting more children on school. The minister also said that the time has now come to focus on learning outcomes. He also said that relaxation of norms is not a factor that could have affected the quality of education, as aspiration levels in rural India are also going up and hence people would not neglect studies.

Promoted
Listen to the latest songs, only on JioSaavn.com
According to social scientist Yogendra Yadav, who was also a part of a council for the act, said it is unfair to blame the RTE act. He said there could be other factors like the issue of recruitment of teachers and their quality.

But there are a few positives as well in the report. The Pupil-Teacher ratio in schools is up, and so is the proportion of schools with usable toilets. But the question is: how soon can the government act to ensure that this crisis in our education system be stemmed now?