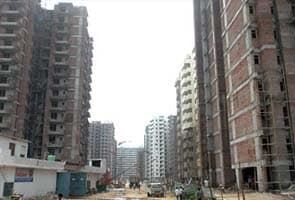 Allahabad: In a setback for Mayawati in the Noida land row, the Allahabad High Court has ordered her government to return land to farmers in three villages - Yusufpur Chak Shahberi, Asdullapur and Devla.

That means apartments that were being pre-sold here by commercial developers will not be built. In exchange, farmers here have been asked to return any money given to them earlier as compensation.

In 60 other villages, however, in the Noida and Greater Noida area, farmers  will not be entitled to reclaim their land- instead, they will receive more money  from the government.

Close to 500 farmers from a dozen villages in the Gautam Budh Nagar district had challenged the acquisition of more than 3000 hectares of land by the state government. Not all of them are happy. Surender Yadav, a farmer with land in Itara village said, "We are not satisfied with this order. There is nothing new in it...if they don't scrap it, we will go to the Supreme Court."

Today's verdict could hit several middle-class investors hard- thousands of people had bought apartments that were to be built in the area by some of India's biggest real estate developers.  Payments had begun against bookings of these apartments.

The court has also ordered the Cabinet Secretary of the state government to commission an inquiry on why the land taken from farmers was assigned to private builders.

Villagers in Shahberi and its surrounding areas had alleged that the government paid them a pittance for their land, and claimed it would be used for industrial projects.  However, the land was then assigned to commercial real estate companies. The court agreed with farmers that the government misused its powers to demand that the land be handed over urgently "for planned industrial development," depriving farmers of the chance to challenge the process of acquisition and the rates offered to them.

Promoted
Listen to the latest songs, only on JioSaavn.com
" It is always easier to cure an illness at an earlier stage. Either provide a safety valve and an outlet or be ready for burst," said Justice SU Khan, who was critical of land acquisition policies.

"Land acquisition is no longer a holy cow, " he said. "If on the acquired land, profit- earning activity is being carried out, then the person whose land has been acquired has got full right to have something like a share in the profit. It is for this reason that during the recent past, in different parts of the country, there has been public opposition of various degrees to the land acquisition."

The land row between farmers in Greater Noida and the government has been a headline for multiple reasons:  thousands of middle-class residents of Delhi and its suburbs had pre-booked apartments which were being built by some of the country's most-reputed builders; there's also the fact that Uttar Pradesh votes soon and the government's alleged unfair practices on land acquisition have turned into a politically-loaded charge. Congress leader Rahul Gandhi has devoted much time to meeting with farmers and raising their problems in widely-covered stopovers  at villages.