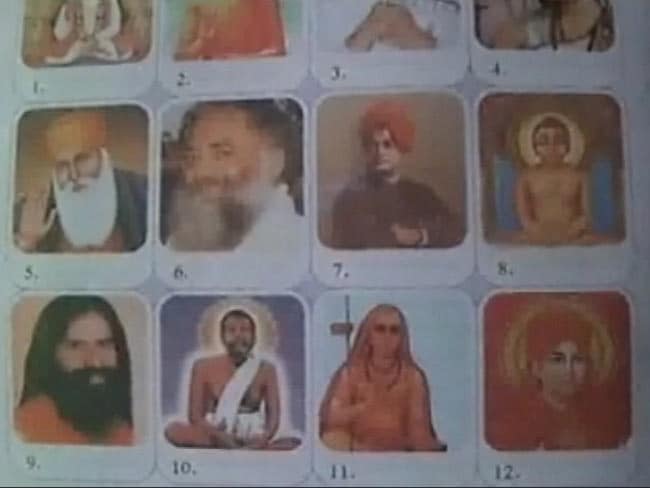 Self-styled Godman Asaram (No. 6 in the grid above) is in jail since August 2013 on charges of sexual assault.

Yoga guru Ramdev is also included in the list of saints in the moral education and GK textbook 'Naya Ujala' which is taught in many schools of the district.

The chapter also has pictures of Guru Nanak, Kabir, Meerabai and Shankaracharya and the children have been asked to identify them including Asaram, who is in a Jodhpur jail after being arrested in a rape case.

The book has been supplied by Delhi-based publisher Gurukul Education Books.

Asked about the inclusion of Asaram's name, a representative of the publishing house said when the book was published, there was no case against Asaram.

"Now we are withdrawing the books from the market and are preparing a new edition of the book sans Asaram," he said.

When officials of the education department were asked about the book, they expressed ignorance about the matter.

However, they said notices would be issued to the school authorities where the textbook is part of the curriculum.

Asaram is in jail since August 2013 on charges of sexual assault. He was arrested after a 16-year-old girl lodged a police complaint, alleging that the self-styled godman sexually assaulted her at his ashram in Jodhpur.