The split in the separatist group comes less than two months after the NDA government appointed Dineshwar Sharma to hold talks with "all stakeholders" in Jammu and Kashmir including separatists. 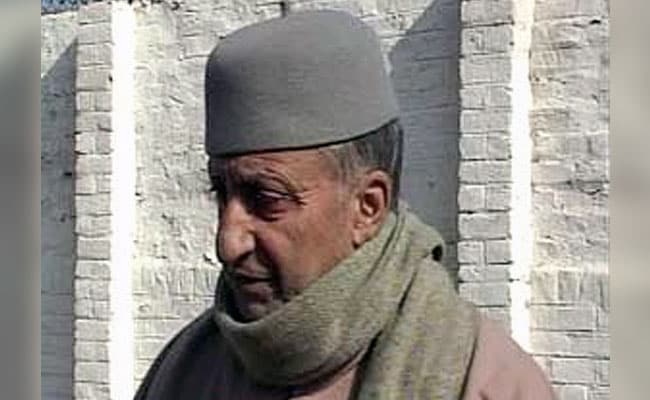 SRINAGAR: A prominent Kashmiri separatist group, Muslim Conference appears to have split right through the middle after its top leader Abdul Ghani Bhat was reported to have quietly met Dineshwar Sharma, the central government's interlocutor for Jammu and Kashmir. Hurriyat leaders had earlier decided not to engage with the interlocutor.

Bhat, who had once led the moderate faction of the separatist conglomerate Hurriyat Conference, was expelled by Muslim Conference leaders. In a letter to the Hurriyat Conference, Bhat's party reportedly called his "secret meeting" with the interlocutor a cause of concern for the party and the people of Kashmir.

"In this backdrop, a meeting of the MC leaders was held, in which it was decided that Muhammad Sultan Magray would be the new president of the outfit for a period of six months," the letter read, according to news agency Press Trust of India.

Bhat retaliated by throwing out the representative of the Muslim Conference, or MC's Pakistan chapter, Manzoor Ahmad Bhat, who was seen to have engineered his ouster.

The split came less than two months after the NDA government appointed Dineshwar Sharma to hold talks with "all stakeholders" in Jammu and Kashmir including separatists.

Bhat, who led the moderate faction of the Hurriyat Conference for years, has been a vocal against violence and was seen to be amenable to dialogue with the government provided credible steps were taken to win the confidence of people.

Like other separatist groups, he was also one of the first to welcome Prime Minister Narendra Modi's surprise visit to Pakistan in December 2015, calling for initiatives "to move out from the frozen yesterdays to a peacefully productive tomorrow".

More than a decade earlier, he was among the group of half-a-dozen separatist leaders who held several rounds of talks with then Deputy Prime Minister LK Advani before the talks fizzled out when the Congress-led UPA government came to power.

Promoted
Listen to the latest songs, only on JioSaavn.com
A teacher of Persian at a government college in north Kashmir's Sopore district, the outspoken professor was dismissed from service in 1986 for being a threat to the security of the state.