The first batch of five Rafale jets arrived in India on July 29, nearly four years after India signed an inter-governmental agreement with France. 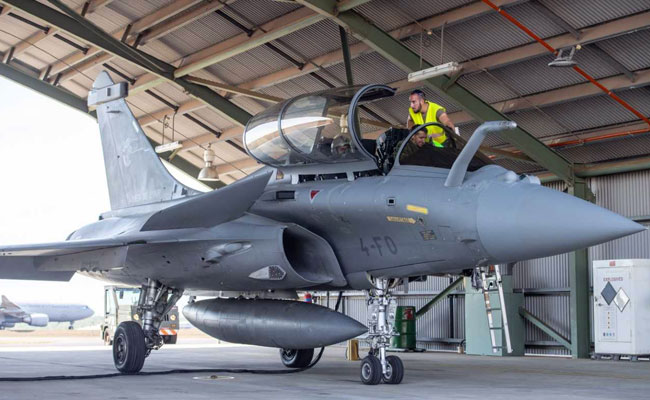 The first batch had arrived in India on July 29 (File)

The second batch of Rafale jets -- the first western combat aircraft to join the fleet 23 years after the Sukhoi aircraft from Russia -- has arrived in India, the Air Force tweeted this evening. The jets had covered the 7,000-odd km flying non-stop from France, the IAF posted after the three aircraft landed.

The delivery had started nearly four years after India signed an inter-governmental agreement with France to procure 36 aircraft at a cost of Rs 59,000 crore.

The induction of all 36 jets will be completed by 2023, Chief of Air Staff Air Chief Marshal RKS Bhadauria has said.

Second batch of IAF #Rafale aircraft arrived in India at 8:14 pm on 04 Nov 20 after flying non-stop from France.

The first batch of five jets had arrived in India on July 29. That time, the jets had refueled midair and made a stopover at Al-Dhafra air base in the United Arab Emirates.

Around 3 in the afternoon, they had landed to a special water cannon salute at the Ambala air base.

"Welcome home 'Golden Arrows'. Blue skies always," the Indian Air Force tweeted with a photo of the Rafales in the "Arrow formation". The IAF had also tweeted an audio clip of the Rafale fleet's exchange with a naval warship as they crossed the Indian Ocean.

The fleet, comprising three single-seater and two twin-seater aircraft, were to be part of the No. 17 Squadron of the Air Force, also known as the ''Golden Arrows'.

The jets were the highlight of the 88th anniversary of the Air Force last month. The newly inducted fleet has also been carrying out sorties in eastern Ladakh, where Indian and Chinese troops have been engaged in a bitter face-off for months.