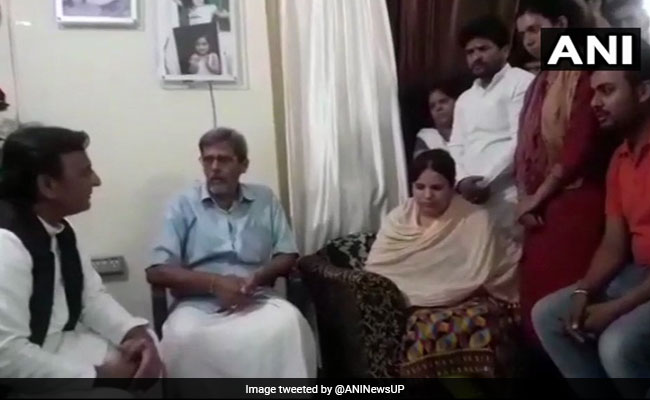 Akhilesh Yadav expressed hope that the court will itself take note of the incident.

Samajwadi Party president Akhilesh Yadav Monday met the family members of Apple executive Vivek Tiwari, who was allegedly shot dead by a police constable, and demanded a compensation of Rs 5 crore and a "respectable" job.

Mr Yadav, the former Uttar Pradesh chief minister, met the wife and daughters of Mr Tiwari and expressed hope that the court will itself take note of the incident, a party release issued said.

He reiterated that "no one is safe" under the BJP government and pinned blame on Yogi Adityanath for the incident, saying it was the cases registered against the chief minister and his use of "intimidating" language in the Assembly which has emboldened police to kill innocents.

The executive was shot dead on September 29 allegedly by a policeman after he refused to stop his car. The incident led to widespread outrage.

This incident has defamed the state the world over, he said, reiterating his demand for Yogi Adityanath's resignation.

Democracy will be "under threat" till there is BJP government at the helm, he said.