The banner in Lucnow, which has photos of Kuldeep Sengar and Chinmayanand along with the charges against them, wastaken down by the police this morning. 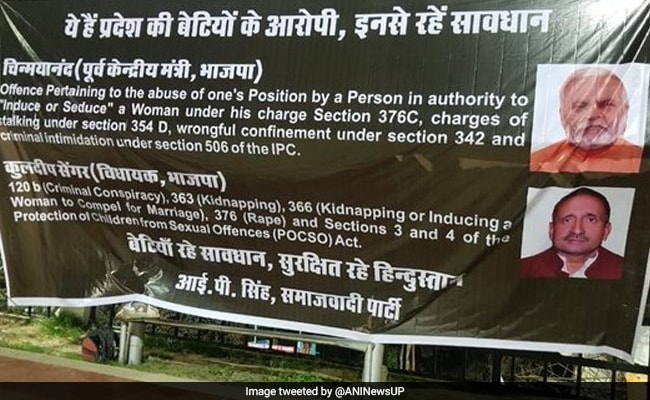 A Samajwadi Party leader put up banner in Lucknow with photos of former BJP leader Kuldeep Sengar and rape-accused ex-Union Minister Chinmayanand. The banner was put up right next to a controversial hoarding by the Yogi Adityanath government naming those accused of violence during protests against the citizenship law.

The Samajwadi Party's national spokesperson IP Singh put up a black hoarding titled in Hindi, "These are the culprits of the state, stay away from them". The banner, which also has photos of Kuldeep Sengar and Chinmayanand along with the charges against them, and came up overnight, was taken down by the police this morning.

"When the protesters have no privacy and the Yogi government does not remove the hoardings despite instructions from the high court and the Supreme Court, then, at the Lohia junction, I too have put up a poster of some criminals named by the courts in public interest. Daughters beware," IP Singh tweeted in Hindi.

Former BJP MLA Kuldeep Sengar was convicted for the rape of a teenager in Unnao. Chinmayanand, also an ex-BJP leader, was arrested in September last year after a law student enrolled in one of his educational institutions at UP's Shahjahanpur accused him of sexually exploiting her for over a year. Soon afterwards, the 23-year-old woman was also taken into custody on charges of trying to extort money from the former Union Minister.

Meanwhile, the Supreme Court on Thursday questioned the Uttar Pradesh government's action of putting up posters against the citizenship law violence-accused, saying there is no law to back the action.

Sources had said the hoardings - in which the persons named were asked to pay for damage to public property and warned that their property would be attached otherwise - were put up on instructions of Chief Minister Yogi Adityanath.

The Uttar Pradesh government had challenged an Allahabad high Court order that called for the  immediate removal of the 'name and shame' posters and hoardings put up across Lucknow. . The case was referred to a three-judge bench on Thursday, with the Supreme Court not putting a stay on the high court's order.