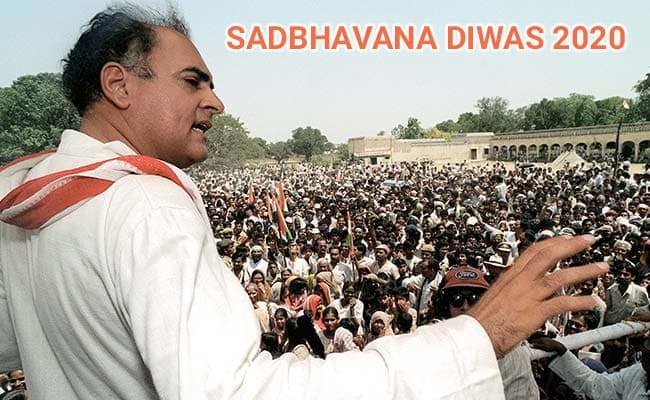 Sadbhavana Diwas 2020: The Congress party observes former Prime Minister Rajiv Gandhi's birth anniversary as Sadbhavna Diwas every year. Born on August 20, 1944, Rajiv Gandhi was assassinated by a Liberation Tigers of Tamil Eelam (LTTE) suicide bomber during an election rally in Sriperumbudur in Tamil Nadu on May 21, 1991. Rajiv Gandhi took charge of the Congress in 1984 after the assassination of his mother and then Prime Minister Indira Gandhi.

Rajiv Gandhi was India's youngest Prime Minister at the age of 40. Sadbhavana Diwas 2020 marks the 76th birth anniversary of the former Prime Minister.

The Congress observes Sadbhavna Diwas to promote national integration and harmony. Several events are organized remembering Rajiv Gandhi on this day. This year there are fewer events due to the coronavirus pandemic.

Rahul Gandhi today visited his father's memorial at Veer Bhumi. In a tweet earlier, the Congress leader said, "Rajiv Gandhi was a man with a tremendous vision, far ahead of his times. But above all else, he was a compassionate and loving human being. I am incredibly lucky and proud to have him as my father. We miss him today and everyday."

Several Congress leaders tweeted tributes to Rajiv Gandhi on Sadbhavana Diwas. Rajasthan Chief Minister Ashok Gehlot wrote on social media, "...As our youngest PM and with his progressive vision, he transformed India into a modern nation focusing on technological advancement."

My humble tributes to Bharat Ratna Shri #RajivGandhi ji on his birth anniversary. As our youngest PM & with his progressive vision, he transformed India into a modern nation focusing on technological advancement. His contribution to the nation's growth would be always remembered. pic.twitter.com/fVJxVqecge

Maharashtra Congress leader, Sanjay Nirupam, in his tribute said, "A true visionary leader who empowered women and youth remarkably. He brought telecom revolution to India and led us into 21st century with a new dream"

My humble tribute to India's former Prime Minister Bharat Ratna Late Sri Rajiv Gandhi on his birth anniversary.
A true visionary leader who empowered women and youth remarkably. He brought Telecom revolution to India and led us into 21st century with a new dream.#RajivGandhipic.twitter.com/Kxff7wvHzw

In a series of tweets, actor and politician, Shatrughan Sinha wrote on the microblogging site: 'Floral tributes, solemn homages and prayers for the most, loved and admired, former PM...He will always be remembered for his contributions and sacrifices for the nation. It's a pity that he left us too soon...". Mr Sinha credited Rajiv Gandhi for expanding the telecom sector and taking it to rural India.

Floral tributes, solemn homages & prayers for the most, loved & admired, frm PM, late & great #RajivGandhi on his birth anniversary. He was far ahead of his times for his vision for our country. His charm, appealing smile & deceny made him a through gentleman politician in

totality. He supported & brought in modernization with the infrastructure, innovation in technology, education, etc. He extended the telecom company taking it to the rural masses. He will always be remembered for his contributions & sacrifices for the nation. It's a pity that he