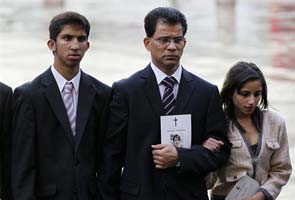 New Delhi: The family of Indian nurse Jacintha Saldanha, who committed suicide after being caught in a prank call by two Australian radio show presenters, have written to the British hospital that employed her and demanded answers to several questions surrounding the incident and her condition before her death.

The family has assembled a set of 60 questions, which they have posed to the hospital as well as to the parent company of the Australian radio station that played the prank.

The letters were sent by Labour MP Keith Vaz, who is acting as a spokesman for the family at their request. Some of the questions suggest the hospital may not have taken extra security measures during the stay of Prince William's pregnant wife Kate Middleton, according to a report in the Daily Mail.

"Was there any indication that Jacintha was under increased pressure or stress in the weeks preceding her death?" asks the family in one of the questions. Another question suggests the nurse may have been involved in a dispute with a colleague a few weeks before Kate was admitted while another implies that the 46-year-old may have been 'spoken to' by the hospital's matron on phone a day after the prank call.

Mrs Saldanha's body was discovered on December 7, and the notes left by her suggested that she may have been under pressure after she fell for the prank.

Forty questions have been directed to the King Edward VII's Hospital, where Mrs Saldanha worked. Another 20 have been posed to Southern Cross Austereo, the parent company of 2Day FM, whose RJs posed as the Queen and Prince Charles and phoned the hospital to know about Kate's health.

The letter to the company asks why nobody attempted to contact the family since the hoax call led to the tragedy. It also asks if there was "any evidence" that 2Day FM staff called the hospital five times to alert them that they were about to broadcast the prank.

"On December 11, the family handed you a list of questions that specifically relate to the hospital. They have not had a written confirmation of the answers. They now have additional questions (and) would like answers... as soon as possible," wrote Mr Vaz in a letter to John Lofthouse, the chief executive of the hospital.

The Daily Mail report said the nurse had made two attempts to kill herself during a visit to India last December - first with an overdose of pills and nine days later by jumping off a building. She spent several days in intensive care before receiving psychiatric treatment and being prescribed anti-depressants, the report said.

Promoted
Listen to the latest songs, only on JioSaavn.com
Her family said the nurse was so ashamed after taking the hoax call that she did not tell her family about the episode, just asking her husband to watch the news.