P T Usha had come agonisingly close to winning a medal in 400 m hurdles at the 1984 Los Angeles Olympics. 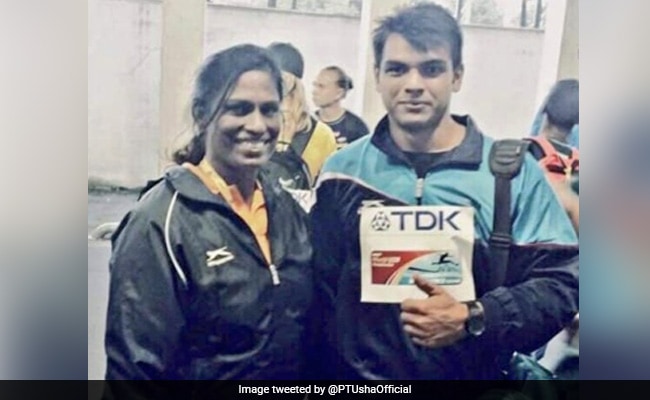 P T Usha shared a picture with Neeraj Chopra and congratulated him on his feat.

Among the millions who congratulated Neeraj Chopra for winning India's first Olympics Gold in athletics was legendary sprinter P T Usha, who missed a place on the podium in the 1984 Games by a whisker.

"Realised my unfinished dream today after 37 years. Thank you my son @Neeraj_chopra1 #Tokyo2020," Ms Usha tweeted, along with a photograph of her and Neeraj Chopra.

Ms Usha, who was called "Payyoli Express" for her stellar speed on the track, had come agonisingly close to winning a medal in 400 m hurdles at the 1984 Los Angeles Olympics.

In the build up to the games, Ms Usha raised hopes by clinching silver medals in the 100 m and 200 m sprint at the 1982 Asian Games in New Delhi.

At the Asian Championships the next year, she set her first Asian record and won a gold in 400 m.

Following this feat, she switched to 400 m hurdles. At the 1984 Olympics, she raised expectations by beating US favourite Judy Brown in the semi-finals.

The 400 m hurdles event had to be restarted after Australia's Debbie Flintoff, starting next to Ms Usha, inadvertently began prematurely.

When the race began, Ms Usha started slow but soon picked up pace. The race ended in a photo finish as Romania's Cristieana Cojocaru edged out Ms Usha by what the Olympics website referred to as "a decisive head dip".

She later went on to win golds at the Asian Games and Asian Championships. The Padma Shri awardee now runs an academy in Kerala for budding athletes.

Despite narrowly missing out on a place on the Olympics podium, Ms Usha inspired future generations of Indian women athletes who have gone to make the country proud on the world stage.