Ram Madhav said scrapping Article 370 of the constitution has started a new chapter of development based on Mahatma Gandhi's ideals of non-violence and unity. 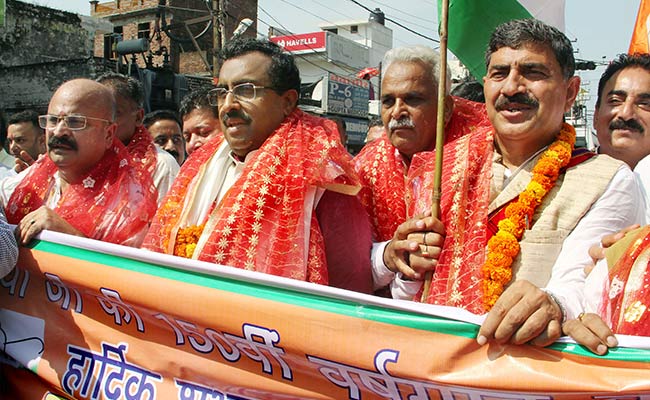 Ram Madhav at an event in Jammu on the ocassion of Mahatma Gandhi's birth anniversary.

Calling Jammu and Kashmir's now-scrapped special status "anti-people and the biggest hurdle" in the development of the state, BJP national general secretary Ram Madhav on Wednesday said that the Modi government had taken up the responsibility to safeguard the interests of Kashmiris on land and culture. Talking about the strict security restrictions on the state, he said only 200-250 people are in preventive detention and that this was temporary.

Mr Madhav said scrapping Article 370 of the constitution, which gave special status to Jammu and Kashmir, has started a new chapter of development based on Mahatma Gandhi's ideals of non-violence and unity.

"The interest of the people of Jammu and Kashmir, their land, their culture and their development, whatever is their interest, the full responsibility of safeguarding these (interests) is taken up by the government led by (Prime Minister Narendra) Modi ji," he said at an event in Jammu.

"This step has been taken in the interest of the people of Kashmir. In the name of Gandhi ji, this government is dedicated to people," he said.

The BJP leader said the government's steps with regard to Kashmir are meant to ensure peace, progress and development for each and every member of the last village in Kashmir.

"This is reason for Modi ji to take such steps. For us, every Kashmiri is a member of the family of this country," he added.

On the detentions, he said 200-250 people are in preventive custody and it is a temporary measure. "They will get back their political rights when situation will become conducive. They will soon come out. It is the administration (which will) decide it," he said.

He said the curbs on communication and movement are temporary.

"This (J&K) will be a full-fledged state and will move forward on the path of development," he said.