In Sachin Pilot vs Ashok Gehlot, The Letter That Was The Last Straw

Sachin Pilot, 42, was on Friday summoned by the Rajasthan Special Operations Group to appear for questioning in an investigation that began during the Rajya Sabha election in June.

A letter asking Rajasthan Deputy Chief Minister Sachin Pilot to appear for questioning in an investigation into alleged attempts to destabilize his own government is believed to have pushed the Congress to breaking point in one of the few states it still rules after losing Madhya Pradesh.

Sachin Pilot, 42, was on Friday summoned by the Rajasthan Special Operations Group to appear for questioning in an investigation that began during the Rajya Sabha election in June, when allegations of the BJP poaching Congress MLAs emerged in the contest for three seats in the upper house of Parliament.

The investigation is based on tapped phone conversations of two BJP leaders in the days leading up to the Rajya Sabha election, which raised allegations of a move to topple the Rajasthan Congress government.

This, combined with the summons, drove Sachin Pilot to Delhi with a group of MLAs. 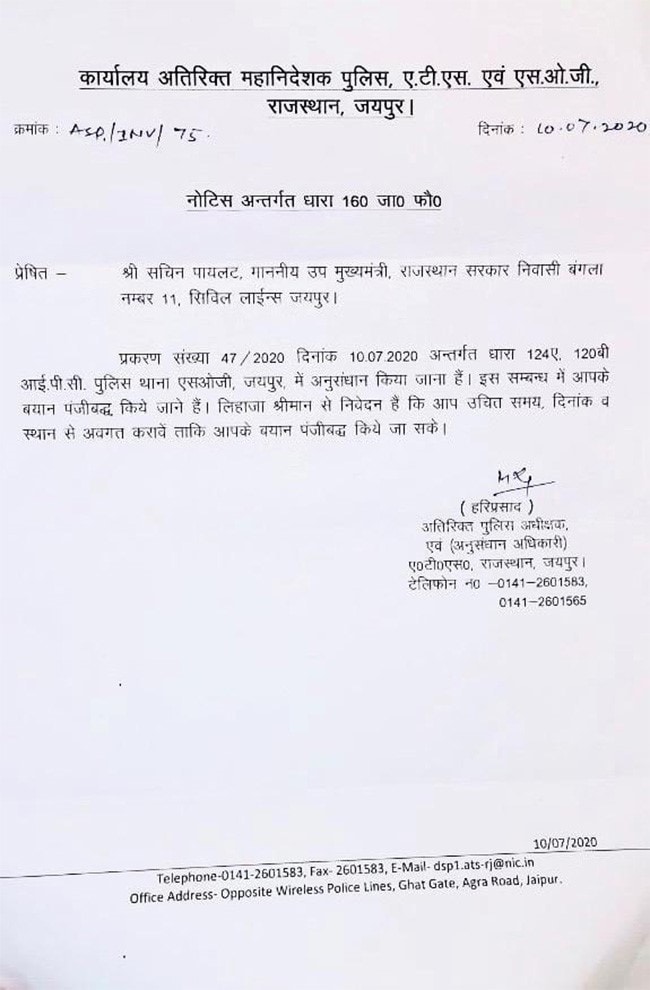 Sachin Pilot was on Friday summoned by the Rajasthan anti-terror squad and the Special Operations Group.

Chief Minister Ashok Gehlot said both he and his deputy would be questioned.

"Notices have been sent to the Chief Minister, Deputy Chief Minister, Chief Whip and some other ministers and MLAs for recording their statement in connection with the the Congress Legislature Party's complaint to the SOG over horse-trading by BJP leaders. The manner in which it has been misrepresented by sections of the media is not appropriate," Mr Gehlot tweeted today.

Given that as state home minister, Mr Gehlot is in charge of the Special Operations Group, the summons was seen as an affront by Mr Pilot. That Mr Gehlot has received a similar summons was viewed as a cover for the humiliation served to Mr Pilot, say sources close to him.

"Never before has a sitting state president been served such a letter," said sources close to Mr Pilot, calling the investigation an excuse to harass and monitor the Deputy Chief Minister.

On Saturday, Mr Gehlot said: "No one is above the law, be it the Prime Minister or Chief Minister, when it comes to matters like this. We will cooperate fully with the investigation."

He also appeared to take a swipe at his deputy when he commented, in response to a question:  "Who doesn't want to be CM? We too may have 5-7 people who may be contenders for CM and may also have the capability and talent. But only one can be CM."

The Chief Minister accused the BJP of offering up to Rs 25 crore to Congress MLAs and independent members to switch sides in order to set up a coup on the lines of Madhya Pradesh, where the Congress government crashed in March after senior leader Jyotiraditya Scindia quit, taking 22 MLAs with him.

When the Congress won two of the three Rajya Sabha seats in Rajasthan, Mr Pilot had said reports of his party MLAs being lured were "baseless". He also emphatically denied reports that he was in talks with the BJP.

Sources say Mr Pilot was furious when he received the notice for questioning.

Both Congress president Sonia Gandhi and Rahul Gandhi have been briefed about the situation.

Sources say the Congress leadership is upset about the summons that has precipitated a huge crisis in Rajasthan when it has already lost two big states to the BJP.

"Sonia Gandhi will take a call on the matter and all must work together whatever the differences," a party insider said. Mr Gehlot said yesterday that the BJP is trying to grab power in the state by bribing MLAs the way they did in Madhya Pradesh. The Anti-Corruption Branch is questioning three Independent MLAs who allegedly made offers of money, sources said.