35 Years Later, 11 Cops Convicted For Sensational Killing Of A 'Raja'

The killing, which took place in February 1985, created a political storm in Rajasthan and led to the resignation of Congress Chief Minister Shiv Charan Mathur

Eleven policemen have been convicted for the 1985 killing of Raja Man Singh, the then-titular head of Bharatpur, a princely state in Rajasthan. A court in western Uttar Pradesh's Mathura, where the case had been heard for the last two decades, will pronounce its sentence tomorrow.

The killing, which took place February 21, 1985, created a political storm in Rajasthan and eventually led to the resignation of Congress Chief Minister Shiv Charan Mathur two days after the incident.

In a statement, Dushyant Singh, Raja Man Singh's grandson, described the events that led to the killing.

"In the 1985 Assembly election in Rajasthan, the Congress fielded a retired IAS officer, Brijendra Singh, against Raja Man Singh, who was contesting as an independent candidate, in the Deeg constituency," Dushyant Singh said in the statement.

"At the time Congress workers insulted the Bharatpur flag and this made Raja Man Singh very angry. He drove his jeep into a stage set up for the then chief minister's rally and damaged a chopper meant to transport the chief minister," the statement added.

All this happened on February 20.

The following day, according to the statement, as Raja Man Singh and two of his associates were going to the local police station to surrender, they were fired upon by a police team led by Deputy Superintendent Kan Singh Bhati.

Raja Man Singh and his associates were killed on the spot.

Among those convicted today was Kan Singh Bhati. 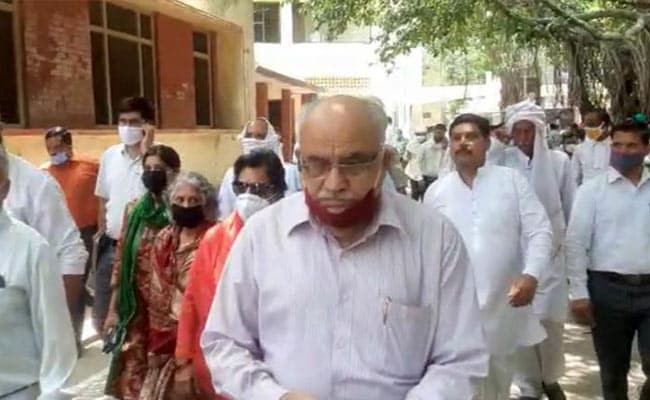 The family of Raja Man Singh

On February 28 a notification was issued for a CBI inquiry.

The case was first heard in a Rajasthan court but it was shifted to Mathura on instruction from the Supreme Court. It took more than 1,700 hearings and 35 years for a judgment to be pronounced.

Incidentally, this case has a connection to the political crisis surrounding the Congress government in Rajasthan. Vishwendra Singh, one of 18 rebel MLAs to side with Sachin Pilot in slugfest with Chief Minister Ashok Gehlot, is Raja Man Singh's nephew.

Mr Singh and another rebel MLA - Bhanwar Lal Sharma - have both been suspended from the Congress following the party's allegations they conspired with the BJP against Mr Gehlot. On Monday Mr Singh lashed out at the Congress government in the state, claiming it was trying to "murder democracy".