Apart from the induction of Raj Thackeray's son, Amit Thackeray, there is going to be a reference to a possible tie-up with the BJP in Maharashtra. 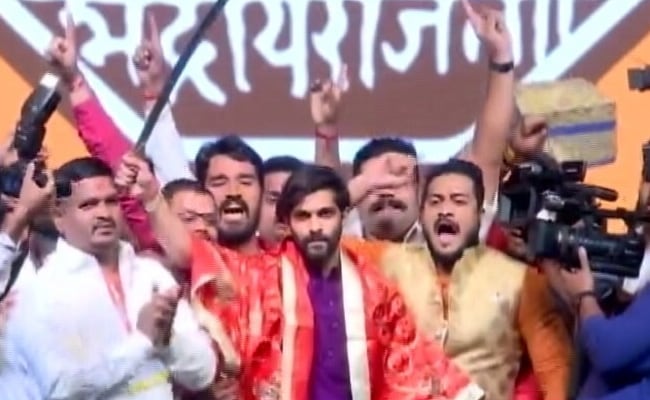 Amit Thackeray, who is a cancer survivor, is seen as the inheritor of Raj Thackeray's political legacy.

Maharashtra Navnirman Sena chief Raj Thackeray is holding a rally in Mumbai to address his supporters about the party's future. On the cards, is the party changing its flag to reflect saffron, a colour used to portray the Hindutva ideology.

Apart from the induction of his son, Amit, there is going to be a reference to a possible tie-up with the BJP in Maharashtra.

The BJP lost power after it failed to come to a power-sharing agreement with the Shiv Sena, a party led by Raj Thackeray's cousin, Uddhav Thackeray. The Shiv Sena went on to form an alliance with the Nationalist Congress Party and the Congress and the Sena-led Maharashtra Vikas Aghadi came to power with Uddhav Thackeray as Chief Minister.

Following the developments of last year, Raj Thackeray met former Chief Minister and Leader of Opposition Devendra Fadnavis, setting in motion a plan to revamp his party which has started with rebranding and the induction of Raj Thackeray's son Amit Thackeray into the party.

Amit Thackeray is also seen as someone who could perhaps ensure that the party's next generation leadership is in place. The Shiv Sena has already accepted Aaditya Thackeray as the heir apparent as he has become a cabinet minister in his father's cabinet.

But beyond leadership, it now seems Raj Thackeray is moving to a pro-Hindutva plank from his violent regionalism politics which hasn't paid much dividend and seen his party shrink in terms of numbers and electoral performance.

Raj Thackeray's move helps the BJP as it is an attempt to carve away at the Sena's base which the BJP has been trying to do for years.

One BJP leader told NDTV on the condition of anonymity, "It takes a Thackeray to fight a Thackeray," setting the stage for a Sena vs Sena battle which will help the BJP gain from the division of votes.

The MNS's Hindutva was made clear this morning when a party functionary proclaimed that Raj Thackeray will henceforth be the new "Samrat". Shiv Sena founder, late Balasaheb Thackeray, was usually referred to as the "Hindu Hridaysamrat" (Emperor of Hindu Hearts).

Thane MNS President Avinash Jadhav's statement on Balasaheb's nephew was greeted with thunderous applause at a massive party convention at the NESCO Grounds, in suburban Goregaon.

These developments are taking place on Sena patriarch and Hindutva icon Bal Thackeray's birth anniversary. While Raj Thackeray rebrands his party, the Shiv Sena is taking the challenge head on by keeping a firm grip on its Hindutva credentials.

Sena chief and Maharashtra Chief Minister Uddhav Thackeray will head to Ayodhya in March to mark 100 days of the 'Thackeray Sarkar' and the Sena is also holding parallel celebrations to mark Bal Thackeray's birth anniversary this evening.