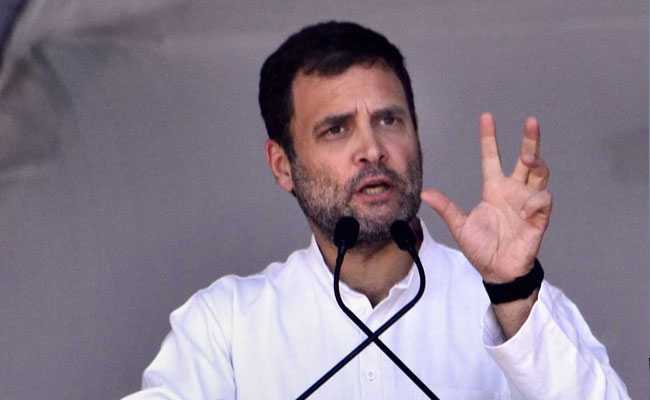 Rahul Gandhi said the alleged theft of Rafale files is a case of destruction of evidence.

Congress chief Rahul Gandhi today turned up the heat on the government over the Rafale issue, saying there is "enough evidence" to prosecute Prime Minister Narendra Modi in the matter. As the Supreme Court deliberates whether to re-open the case involving the acquisition of the 36 Rafale fighter jets, the government told the court that crucial documents linked to the deal was stolen.

Mr Gandhi, who has been alleging corruption and crony capitalism in the deal, tweeted that it was a case of "obvious cover-up".

"There is now enough evidence to prosecute the PM in the #RafaleScam. The trail of corruption begins & ends with him. That crucial Rafale files incriminating him are now reported "stolen" by the Govt, is destruction of evidence & an obvious coverup," Mr Gandhi's tweet read.

The Congress has alleged that the government accepted an overpriced deal in 2016 and overlooked public sector aviation firm Hindustan Aeronautics Limited so that industrialist Anil Ambani's rookie firm Reliance Defence could bag an offset contract.

The government, Dassault and Anil Ambani have denied the allegations.

Today, the government told the court that the documents related to the Rafale deal were stolen from the defence ministry. The petitioners in the case, who have sought a review of the top court's verdict on the matter in December, had accessed those papers illegally, the government said.

In the December verdict, the court said there was "no occasion to doubt the government's decision making process" to acquire the Rafale fighter jets.

But former NDA ministers Yashwant Sinha and Arun Shourie, advocate Prashant Bhushan and Aam Aadmi party lawmaker Sanjay Singh have filed petitions, contending that the top court re-consider its judgment as it relies on a "non-existent" CAG report to uphold the Rafale deal.

The petition was filed after the Centre called for a correction in the verdict, saying the court had misunderstood the procedure mentioned -- that the Comptroller and Auditor General or CAG had examined the pricing of the jets and submitted its report. The national auditor had not filed his report before the Centre presented its report in a sealed cover.