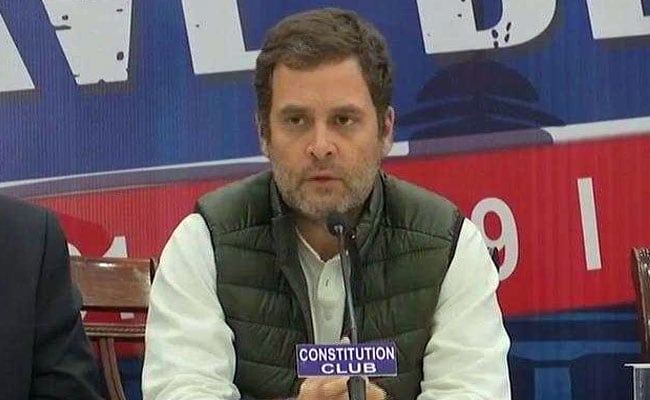 Congress chief Rahul Gandhi on Friday said "surgical strikes" -- one after the other -- will be launched on the Narendra Modi government in the coming days by his party. Hinting at the issues on which the "surgical strikes" will be held, he said the biggest one facing the country was joblessness and the government has "failed completely" to address it.

The term "surgical strike" has been a running theme through the day, with NDA allies calling the budget a strike on the opposition.

Welcoming the interim budget this morning, BJP ally Ram Vilas Paswan said it was the "second surgical strike"."The first one was on the border with bullets. This is the second one, as we are going into the 2019 polls with ballots. We will win with two-thirds majority," the Bihar leader told NDTV.

A strong response came from senior Congress leader Shashi Tharoor. "The so-called surgical strike in Pakistan did not prevent any of the bad things that have continued from there. If they (the NDA) call this a surgical strike, then we are anticipating failure in advance," Mr Tharoor told NDTV.

At a press conference in the evening, Rahul Gandhi gave his take on the issue -- that "there will be one surgical strike after another on the Modi government in the coming days".

The Congress chief told the media that the Rs 6,000 yearly cash for farmers was a pittance. "You can waive Rs 3.5 lakh crore loan of 15 people, but give only Rs 17 per day to farmers. What else is this if not an insult?"

The Congress, Mr Gandhi said, would contest the elections on the issues concerning farmers, unemployment and attacks on institutions. "It will also be on the issue of Rafale," he added.

The Congress said its detailed criticism of the budget will come tomorrow after it gets a chance to study the figures.

The party told reporters that it will meet the Election Commission on Monday with a document it has prepared on Electronic Voting Machines. "The main issue with EVM is that there is a doubt among many, many people about the fairness of EVMs. We want to create a backup to the system," Mr Gandhi said.

Prime Minister Narendra Modi has said the budget is a "trailer" for what is to come after the Lok Sabha elections.