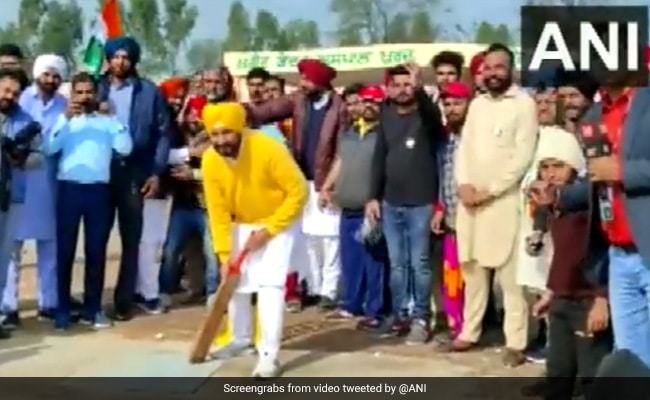 Punjab votes in a single phase on February 20. Votes will be counted on March 10.

In another attempt to reinforce his image as a people's chief minister, Charanjit Singh Channi was today seen playing cricket with youngsters and card games with the elderly as part of his Punjab assembly election campaign.

Sporting a yellow turban and a sweater of the same colour, he can be seen holding a bat while half-heartedly attempting to hit a shot. Later in the video, tweeted by news agency ANI, he is seen sitting in a circle with elders and enjoying a game of cards.

After a heated contest between him and Punjab Congress chief Navjot Singh Sidhu, Mr Channi was recently announced the state's chief minister candidate from the Congress by Rahul Gandhi.

In contrast to the public image of former Congress chief minister Amarinder Singh who was seen by many as arrogant and inaccessible, Mr Channi has been projecting himself as the people's chief minister.

Charanjit Channi is Punjab's first Dalit chief minister, and the grand old party has been banking on his caste identity to woo Schedule Caste voters in both the assembly elections and the 2024 Lok Sabha elections. Dalits constitute 32 per cent of the state's population.

Mr Channi had earlier met auto-rickshaw drivers in Ludhiana and heard their grievances. He had assured them that their pending challans will be waived.

Congress MP Rahul Gandhi, while announcing the chief minister pick, had positioned Mr Channi as the "poor chief minister" who would always work for their benefit.

Mr Channi has also said that he is the leader of the poor and the middle class and that he would not work for the benefit of the elite class.

The Punjab chief minister recently came under criticism from rivals after his nephew was arrested in a case relating to illegal sand mining and huge sums of cash were found at his residence.

The Aam Aadmi Party had attacked him, calling him the "sand mafia". Mr Channi, however, has called the raids on his relative politically motivated, pointing out that it comes just ahead of elections.

Punjab votes in a single phase on February 20. Votes will be counted on March 10.