Punjab Assembly Elections: The case was registered based on the Returning Officer (RO) Baljit Kaur's report that over 6,000 people gathered at the SAD rally against the Election Commission's permissible limit of 1,000 people at physical rallies. 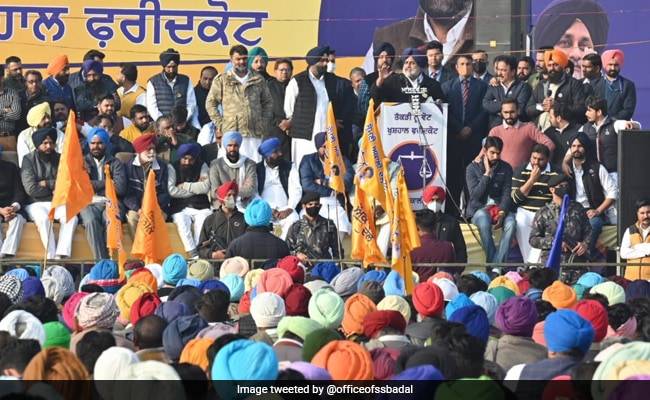 Punjab Elections: Sukhbir Singh Badal addressed a gathering in support of Romana at Faridkot on Saturday.

The case was registered based on the Returning Officer (RO) Baljit Kaur's report that over 6,000 people gathered at the SAD rally against the Election Commission's permissible limit of 1,000 people at physical rallies. The complaint was submitted by the Aam Aadmi Party (AAP), which alleged the SAD allowed more than the permitted number of people at the election rally.

In the complaint and video evidence submitted by the Aam Aadmi Party to the election officer, it said that despite the Election Commission's order of 500 people inside and 1000 outside at election rallies, on February 5, SAD gathered a crowd of more than 6000 people in Faridkot's new grain market which was attended by SAD chief Sukhbir Singh Badal and Faridkot assembly candidate and SAD youth wing chief Parambans Singh Bunty Romana. Following this, the RO investigated and the case was registered against the SAD chief and Romana.

The FIR was lodged a day after Mr Badal addressed a large gathering in support of Romana at Faridkot City on Saturday.

Senior Superintendent of Police (SSP) Varun Sharma said, "We received a written complaint regarding the model code of conduct violation from the Returning Officer and according to the complaint, a case has been registered against Sukhbir Singh Badal and Parambans Singh Bunty Romana and some other persons under the violation of elections model code of conduct and COVID protocols."

The Election Commission of India (EC) extended its ban on political rallies and roadshows on January 31 in the five election-bound states including Punjab till February 11.

Meanwhile, on Sunday, the EC granted relaxation for holding indoor and outdoor public meetings in the five poll-bound states while sticking with the ban on roadshows, rallies, processions, and 'padayatra'.