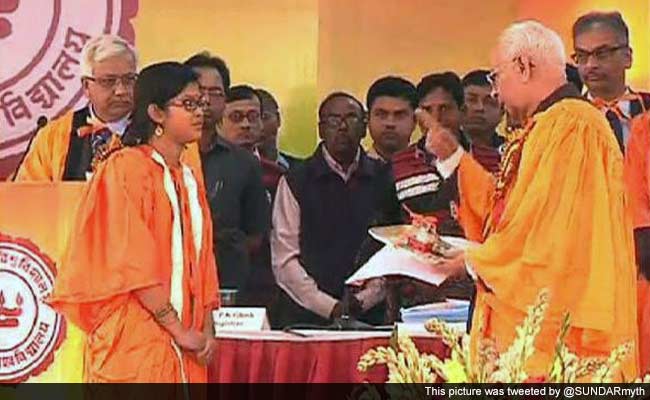 The students were protesting against Vice Chancellor Abhijeet Chakraborty

Kolkata: The 59th Annual Convocation of Kolkata's Jadavpur University on Wednesday turned embarrassing for West Bengal Governor Keshari Nath Tripathi, who is also its Chancellor, when a student refused to accept the best graduate degree and gold medal from him.

Geetoshree Sarkar, the student of the Bengali department, said she won't accept the medals in the presence of Vice Chancellor Abhijeet Chakraborty. The students have been demanding Mr Chakraborty's resignation after he reportedly ordered police lathicharge on university students in September when they were protesting against an alleged molestation incident.

"I told the Governor that I cannot receive the medals and certificate in presence of the VC. The Governor then asked me to go away," Geetoshree told reporters after coming down from the convocation dais.

Another PhD student Abhisek Mitra accepted his certificate, but raised a placard which said "Resignation, No Negotiation", which was meant for the VC.

A section of students also protested against Mr Chakraborty. Placards saying "Go Back Governor, Go Back VC" were found across the university campus and along the walking bay to the event ground. Students also raised slogans outside the venue.

The Chancellor had earlier threatened the students with a proposal to put a stamp on the certificates of those who were not participating in the convocation, but it failed to dilute the intensity of the agitation.

In his address, Mr Tripathi said, "Never act in a way that reputation of an institution is diminished and will undervalue the degree. Let us forget if anything untoward has happened and have a large heart to forget and forgive," he said.

Promoted
Listen to the latest songs, only on JioSaavn.com
The Governor also appealed to the students to cooperate, but the protesters instead held a mock convocation.