Pranab Mukherjee, who was President from 2012 to 2017, was awarded the Bharat Ratna, India's highest civilian honour, by his successor, President Ram Nath Kovind, earlier this year 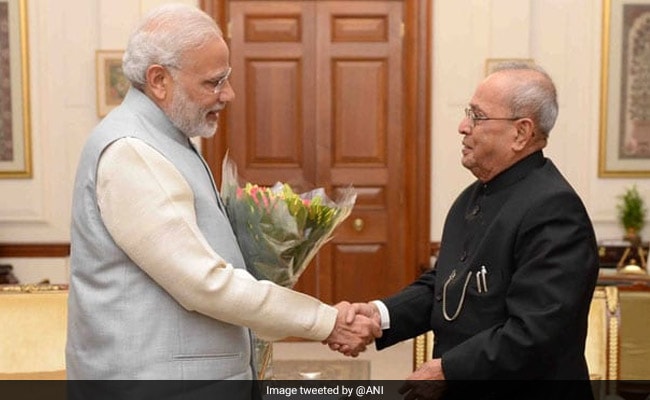 Prime Minister Narendra Modi wished former President Pranab Mukherjee this morning on the occasion of his 84th birthday. Describing Mr Mukherjee as a "remarkable former President and statesman", PM Modi thanked him for his many years of service to the nation and offered prayers for his long life. Pranab Mukherjee, who was President of India from 2012 to 2017 - spanning the second term of the Congress-led UPA government and the first of the BJP-led NDA government - was awarded the Bharat Ratna, India's highest civilian award, earlier this year by his successor, President Ram Nath Kovind.

"Birthday greetings to our remarkable former President and statesman Shri Pranab Mukherjee. He has served India with diligence and determination. He is widely admired across the spectrum for his intellect, wit and razor-sharp memory. Praying for his long life," the Prime Minister tweeted.

Birthday greetings to our remarkable former President and statesman, Shri Pranab Mukherjee. He has served India with diligence and determination. He is widely admired across the spectrum for his intellect, wit and razor-sharp memory. Praying for his long life. @CitiznMukherjee

PM Modi was joined in his birthday message by a number of other political leaders.

Ashok Gehlot Chief Minister of Congress-ruled Rajasthan, wished Mr Mukherjee a long and healthy life and thanked him for his leadership

Wishing former President of India, Sh #PranabMukherjee a very happy birthday. Pranab da has spent his entire life in the service of nation & as a leader and statesman his advice and guidance has been most valuable. May he have a long, healthy, happy life. @CitiznMukherjee

Captain Amarinder Singh, the Chief Minister of Punjab, another Congress-ruled state, also wished Mr Mukherjee on his birthday, posting a photograph of the two of them enjoying a lighter moment together.

Wishing Former President Of India, Shri @CitiznMukherjee on his birthday. I pray for your long and healthy life. Your experience, strength, and leadership is a source of inspiration to many. #HappyBirthdayPranabMukherjeepic.twitter.com/btcpykExyL

Warm birthday wishes 💐for our former President of India🇮🇳 #PranabMukherjee, a seasoned political leader and Congress loyalist having served in several portfolios over 5 decades. Wishing you a healthy long life with peace & happiness always.#HappyBdayPranabMukerjee

Greetings to former President of India, Shri Pranab Mukherjee @CitiznMukherjee on his birthday. India has benefitted immensely from his wisdom and statesmanship. I pray to the almighty for Pranab da's well-being and wish him a long, healthy and happy life ahead.

Union Minister Nitin Gadkari also sent his wishes, writing, in Hindi: "(To the) former President of India, Bharat Ratna Shri @CitiznMukherjee, birthday greetings and best wishes. May God keep you healthy and give you a long life".

A former member of the Rajya Sabha and the Lok Sabha, Pranab Mukherjee was born December 11, 1935. A veteran Congress leader, Mr Mukherjee was close to former Prime Minister Indira Gandhi and, over the course of his political career, held a number of key ministerial berths, including Finance, Defence and External Affairs.