"Least I Can do": Minister Prakash Javadekar Reaches Parliament In E-Car

The air quality in Delhi improved marginally today but remained in the "poor" category for the second consecutive day. 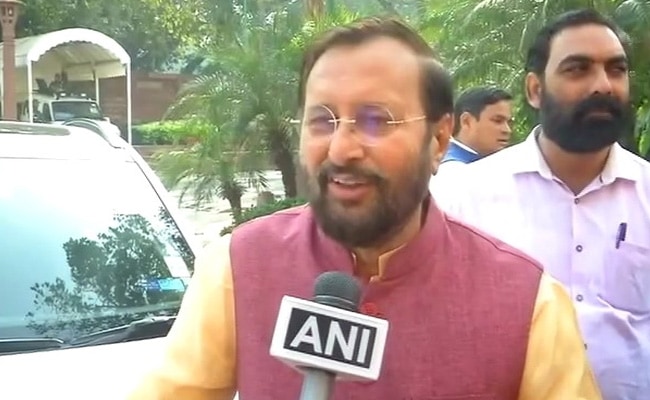 The centre is slowly replacing all old government vehicles with new electrical cars, Union Minister Prakash Javadekar said today as he reached parliament in an electric car to attend the first day of winter session of parliament, urging people in Delhi to fight air pollution. The air quality remains "poor" in the national capital.

"This electric car can cover 450 km after being charged once. I am the environment minister.... this is the least I can do," he told news agency ANI.

"We will have to wage this battle against pollution Delhi everyday. I appeal to the people to use cycles, electric vehicles to curb pollution," he said urging people to bring a change in lifestyle for the sake of environment.

"The government is providing subsidy on electrical vehicles... so people should use it," he added.

The air quality in Delhi improved marginally today but remained in the "poor" category for the second consecutive day. At 9 am, the air quality index (AQI) in the national capital was recorded at 207 against an AQI of 254 at the same time on Sunday.

Among other MPs who made a statement on increasing air pollution on the first day of winter session were BJP MP Mansukh Mandaviya and his party colleague Manoj Tiwari who reached parliament riding a bicycle.

Congress MP Gaurav Gogoi wore a mask as a mark of protest in front of the statue of Mahatma Gandhi.

The winter session of parliament which began today will continue till December 13.