A year on, the Congress has not been able to pick a permanent chief and many are still waiting for Rahul Gandhi to reconsider his decision to quit the job. 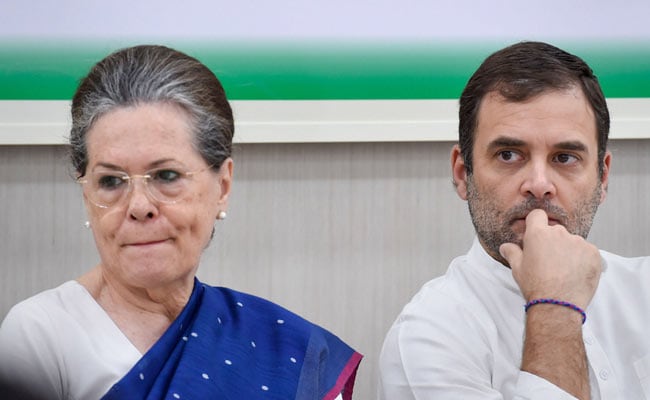 The letter has sought "full-time" and "visible" leadership that would be "active" in the field.

More than 20 top leaders of Congress has written a letter to the party's interim chief Sonia Gandhi, urging a discussion on the party's leadership issue and suggesting sweeping reforms, that suggested criticism of the current system. The party, the letter said, is declining steadily and its revival is essential for the nation and democracy. The letter will be discussed by the party at the online meeting of his top decision-making body, the Working Committee, tomorrow, Mrs Gandhi has said, according to sources.

The letter has sought "full-time" and "visible" leadership that would be "active" in the field. The signatories, however, made it clear there was  no criticism of Rahul Gandhi and it was an honest and constructive approach for the revival of the party. The letter praised Rahul Gandhi and Sonia Gandhi and said they will remain an integral part of the "collective leadership".

"We have not criticised either Sonia or Rahul Gandhi but we want a complete overhaul of the Congress party in its management and style," a senior leader said.

Last year, a reluctant Sonia Gandhi took charge as the interim president after her son Rahul Gandhi stood firm on his decision to resign as Congress chief after the party's collapse in the Lok Sabha election for the second consecutive time.

A year on, the Congress has not been able to pick a permanent chief and many are still waiting for Rahul Gandhi to reconsider his decision to refuse the job.

The letter also called for a range of reforms within the party, sources said. The list includes decentralisation of power, empowerment of state units and organizational elections at every level.

The letter also criticized the functioning of the party's two top bodies - the Working Committee and the Parliamentary Party, sources said. While one is unable to provide guidance to the party in the battle against the BJP, the Parliamentary Party meets involve the addresses of CPP chairperson Sonia Gandhi and obituary references, the letter said.

The letter called for elections to pick members of the Working Committee, a practice which was the norm earlier but has been discontinued for long, sources said.

The letter said there has been no "honest introspection" about the party's defeat in 2014 and the steady decline since. It also suggested the establishment of an "institutional leadership mechanism" to collectively guide the party's revival.

But the letter also thanked Sonia Gandhi and Rahul Gandhi and said the Nehru-Gandhi family will always remain an "integral part" of the collective leadership, sources said.