Chief Minister Himanta Biswa Sarma said a college lecturer was among those who visited the area a day before the violence. 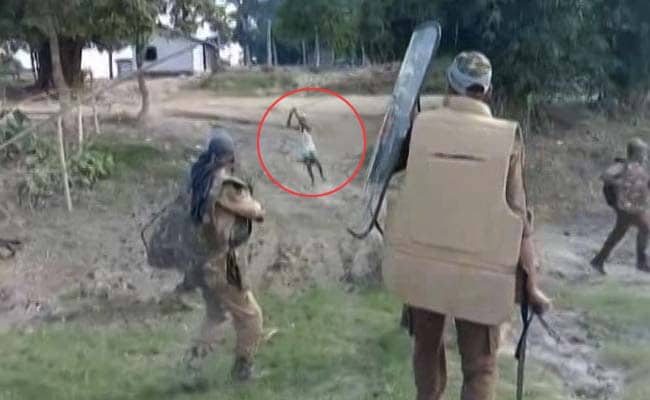 Visuals from the incident have sparked a national outrage over police brutality.

The extremist Islamist group Popular Front of India (PFI) was involved in last week's violence during an eviction drive in Assam's Darrang district, visuals of which have sparked nationwide outrage, Chief Minister Himanta Biswa Sarma said today. Denying that there was a communal angle to the incident, he claimed the images from the police firing that have been broadcast till now do not give out the full picture.

A fierce face-off turned into a clash with sticks between the police and the locals during an anti-encroachment drive in Darrang last Thursday. Two persons people, including a 12-year-old, died in police firing. At least 15 people, including nine policemen, were injured in the clashes.

One video from the site showed a man with a stick charging towards the policemen-in-riot-gear armed with sticks and guns. He is seen being overpowered, shot, and then brutally thrashed. The blows don't stop even as he lies motionless on the ground.

"The state government has clear evidence that a certain group of people collected Rs 28 lakh in the past few months from the poor people there saying they will convince the government against eviction. We have those names. When they could not resist the eviction drive, they mobilised the people and created havoc...we have the names of six people who were involved," Chief Minister Sarma told media persons today.

"Prior to the day of the incident, in the name of carrying food items for evicted families, PFI visited the site. So, evidence is emerging, implicating certain people, including a college lecturer. They will be brought under investigation...the government of Assam had already sent a dossier to the Centre seeking a total ban on PFI."

The state government has announced a judicial inquiry into the incident by a retired Gauhati High Court judge whose name is yet to be declared.

The Darrang district administration has so far cleared over 600 hectares of land and evicted 800 families since Monday, demolishing four "illegally" constructed religious structures at Sipajhar.

"The eviction was supposed it be done against 60 families. How did ten thousand people come there?" Mr Sarma asked.

He said he had taken into confidence the Opposition and representatives of the state's minorities about the eviction drive. He accused them of creating "mayhem" now. He also blamed the 'national media' for not stating the complete sequence of events that led to the tragedy.

"You have to see the total video. The protesters first attacked with a sharp shovel. But we don't justify or support retaliation. If you have to pick up a part of the video clip, you should show the entire clip, the entire sequence," Mr Sarma said today.

"Twenty-seven policemen were ghereoed by ten thousand people. Two-three injured police personnel Muslims. So it's not communal, but why is the national media giving it a communal colour?"