The Election Commission had written to the revenue secretary, advising the enforcement agencies under the departments to keep actions during elections "neutral, impartial and non-discriminatory".

The government's Revenue department has been censured by the Election Commission for a "casual and trivial" response to its advisory on tax raids on opposition party leaders was responded to. Expressing serious displeasure, the election body said that the Revenue Department "insolently" chose to issue a counter advisory in its response.

On April 7, the Election Commission had instructed investigation and enforcement agencies under the Finance Ministry to ensure that raids carried out before elections be "absolutely neutral, impartial and non-discriminatory" amid opposition allegations that the leaders are being targeted.

"Further, in case of suspected use of such illicit money for electoral purposes, the Chief Electoral Officer should be kept suitably informed while the Model Code of Conduct is in force," the commission said in the statement, specifically mentioning probe agencies coming under the administrative control of the ministry's Department of Revenue.

In response, the Revenue Department asked the poll body to "advise" its officers to take action "to check and eventually eliminate the use of unaccounted money". 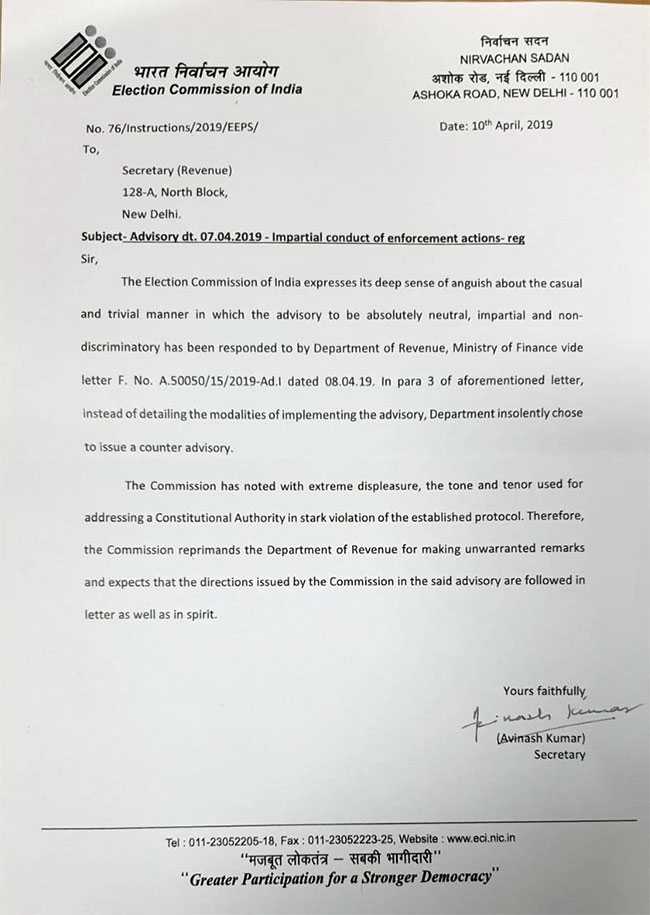 A letter by the Election Commission addressed to the Revenue Department

"Since it is the responsibility of the Election Commission as also of the revenue agencies to check and eventually eliminate the use of unaccounted money in election, we would also like to urge the Election Commission to advise its field officers involved in the enforcement of the Model Code of Conduct to take immediate enforcement action at their end," Deputy Secretary Arvind Saran's letter to the poll body read.

The department's reply prompted a sharp rejoinder from the election body. "The Commission has noted with extreme displeasure, the tone and tenor used for addressing a Constitutional Authority in stark violation of the established protocol," the Commission said, directing the government body to comply with directives in the advisory.

The Constitution grants extraordinary powers to the Election Commission after the elections are announced. The poll body gets the power to supersede all the government bodies.