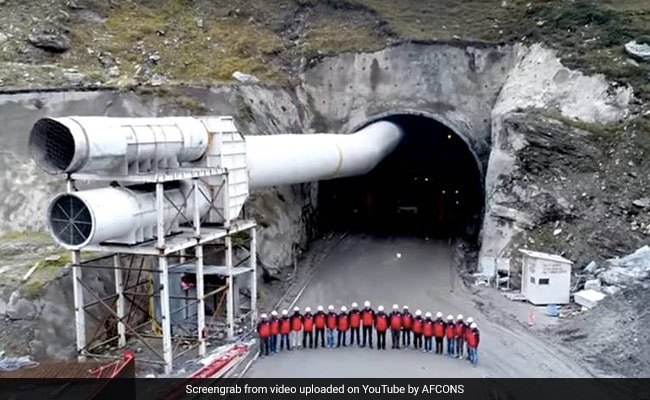 Atal tunnel will be the world's longest above an altitude of 3,000 metres. (FILE)

Himachal Pradesh Chief Minister Jai Ram Thakur on Saturday said the ''Atal Tunnel'' in Rohtang would be inaugurated by Prime Minister Narendra Modi by the end of September this year.

Mr Thakur stated this while presiding over a state-level Independence Day function at the historic Dhalpur Maidan in Kullu district.

He also said the COVID-19 pandemic has adversely affected the state's economy, however, India reported less deaths due to the disease as compared to other countries due to timely decisions taken by the prime minister to check its spread.

Mr Thakur said the 8.8-km-long tunnel was about to be completed and it would be dedicated by the prime minister to the nation by the end of September this year.

The chief minister hoisted the national flag and took salute at the march past by the contingents of police, Indo-Tibetan Border Police, Home-Guards and Sashastra Seema Bal cadets. Deputy Superintendent of Police Veeny Minhas commanded the parade.

"The country is in secure hands of PM Modi as with his timely decisions, India with a population of 135 crore have reported only about 50,000 deaths due to COVID-19 till date as compared to 7.60 lakh deaths in 15 most developed countries with a total population of 142 crores," he added.

Mr Thakur said the ''Atal Tunnel'' would be developed as a major tourism attraction and the state government is contemplating to start a ''Vistadom'' bus for tourists there.

The union government in December last year named the strategic tunnel under the Rohtang Pass in Himachal Pradesh after former prime minister Atal Bihari Vajpayee in a tribute to him on his 95th birth anniversary.

The tunnel will be the world's longest above an altitude of 3,000 metres and will reduce the distance between Manali and Leh by 46 km.

Once thrown open, the tunnel will provide all-weather connectivity to remote border areas of Himachal Pradesh and Ladakh which otherwise remain cut-off from the rest of the country for about six months during winters.

Mr Thakur also thanked the corona warriors for their valuable contribution and people of the state for their cooperation to comply with the guidelines given by the government from time-to-time.

The 74th Independence Day was celebrated with enthusiasm and gaiety in the state by maintaining social distancing in the wake of the pandemic.

Functions were organised at state, district and sub-divisional levels to mark the occasion.

The chief minister paid rich tributes to the brave soldiers of the state, who laid down their lives recently in the Galwan Valley attack in Ladakh.

He also thanked the people of the state for generously contributing towards the CM's COVID-19 relief fund. He said that an amount of Rs 82.48 crore was contributed towards the fund out of which Rs 22.08 crore were spent on COVID care.

He also flagged off ''Nasha Nivaran Van'' on the occasion.