PM Told Sushma Swaraj He Never Writes His Speeches. How She Responded

Joined by leaders from all major parties, PM Modi paid tributes to Sushma Swaraj, who died last week, at a condolence meeting in New Delhi. 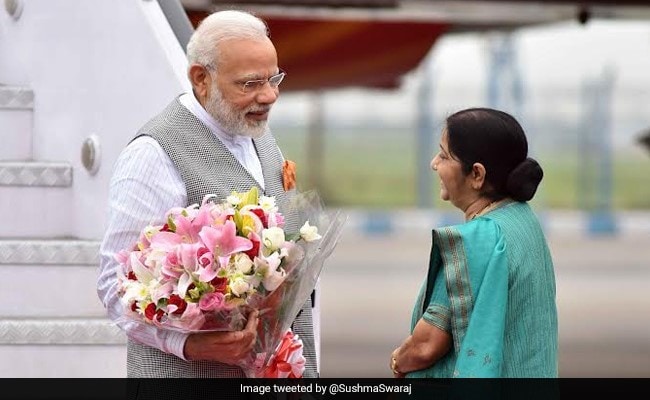 Prime Minister Narendra Modi, paying tribute to Sushma Swaraj at a memorial for the former union minister and senior BJP leader on Tuesday, said she transformed the foreign ministry from one bound to protocol to a ministry oriented to the call of the people and also shared that she had urged him to deliver his first UN speech from a prepared text, not extempore.

PM Modi, along with leaders from various parties, attended a condolence meeting in Delhi for the BJP stalwart, who died last week.

The Prime Minister said he learnt a lot from Sushma Swaraj and shared an anecdote about being schooled by her when he was to speak at the United Nations General Assembly in 2014, months after he assumed office for the first time.

After she received him, he suggested that they sit together as he had to deliver his speech the next day, PM Modi said.

Ms Swaraj enquired where his speech was and he said he never wrote his speeches as he found it difficult.

"She said, 'aisa nahi hota hai, bhai (It does not work like this, brother).You have to speak about India to the world. You cannot speak as you wish'. I was Prime Minister and she was my colleague minister taking care of the External Affairs Ministry..." PM Modi remarked.

The Prime Minister said he had just had a long flight and was also on fast due to 'navratra' but she insisted he share his thoughts.

The ministry prepared a draft speech for him, he said.

"It was her request... One may be a fine orator but there are some forums which have their own traditions. This was the first lesson Sushma ji had taught me," he said, adding she had the courage to speak what she believed to be right.

Referring to Ms Swaraj's prompt response to Indians facing problems abroad or related to the ministry, he said she transformed the ministry.

"She changed this whole thrust in the ministry about protocol into people's call... India is with all Indians living abroad in their pain irrespective of the colour of their passports," he said.

The number of "Passport Seva Kendra" rose to 505 under her from around only 77, he said.

PM Modi commented that the BJP leader also had a "Haryanvi touch" as she put across her points forcefully if she believed she was right.

Noting that she died hours after expressing her joy at parliament passing the government's resolution to end special status to Jammu and Kashmir, the prime minister said she was very happy and died peacefully.