Prime Minister Narendra Modi said the Chief Minister reveres "the (Gandhi) family" more than the nation and that's why he "boycotted" an event attended by the Vice President. 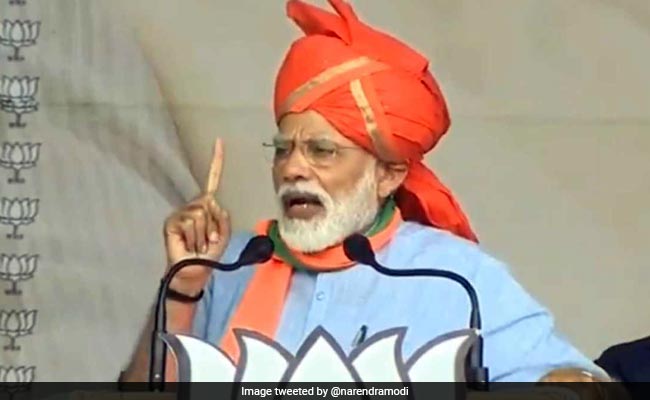 PM Narendra Modi said he has not questioned the "patriotism" of Punjab Chief Minister Amarinder Singh.

Prime Minister Narendra Modi today weighed in on the debate over the Jallianwallah Bagh massacre by the British, which has been raging between the Congress and the BJP in Punjab. Targeting the Congress's Amarinder Singh - a former officer of the Indian army -- he said the Chief Minister reveres "the (Gandhi) family" more than the nation and that's why he "boycotted" an event attended by the Vice President.

Yesterday was the centenary of the Jallianwalla Bagh, where nearly 1,600 peaceful protesters were killed by soldiers led by British General Dyer. Mr Venkaiah Naidu had attended a government programme in the area, where homage was paid to the martyrs.

Speaking at Kathua in Jammu and Kashmir, PM Modi said the Congress "politicised this sensitive occasion".

Amarinder Singh, he said, was "busy in 'bhakti' of 'Congress parivar'".

"He went to Jallianwala Bagh with naamdar but didn't find it right to attend event with Vice Pres. This is the difference between 'Rashtrabhakti' and 'Parivar bhakti'," PM Modi said. "Naamdar" is a pejorative for Congress chief Rahul Gandhi.

The Prime Minister then amended: "I have known Captain Amarinder Singh for a long time. I have never raised a question on his patriotism. I can understand the kind of pressure which must have been put on him for such 'parivar bhakti'."

Mr Singh, however, hit back, accusing the Prime Minister of "playig politics" over a "sombre event".

Shocked by your remarks in Kathua on Jallianwala Bagh @narendramodi ji. You used a somber occasion to play dirty politics, conveniently ignoring your own government's decision to hold a parallel event instead of extending support to my govt, which we'd been requesting for 2 yrs.

Yesterday, Amarinder Singh's tweet that the UK government issue and "unequivocal apology" for the massacre a hundred years ago,  Union minister Harsimrat Kaur Badal said the Congress should apologise for the Operation Bluestar - the a military crackdown on Sikh terrorists who were carrying on the Khalistan movement.

In another tweet, she said: "Pb CM @capt_amarinder took @RahulGandhi to Sri Akal Takht Sahib but lacked courage to ask him to admit the @INCIndia's sin of demolishing Sikhs' highest religio-temporal seat with tanks & mortars. What a contrast with demand for British apology for #JallianwalaBaghMassacre!"

The Chief Minister responded with an equally scathing tweet.

"Did you, your husband @officeofssbadal or his father, Parkash Singh Badal, ever apologise for your great grandfather, Sardar Sunder Singh Majithia's lavish dinner to Gen Dyer on the day of the Jallianwala Bagh massacre? He was later knighted in 1926 for his loyalty and his deeds," he said.