Mayawati accused PM Modi and BJP chief Amit Shah of trying every tactic to ensure that the pre-poll tie-up between her party, and RLD did not do well in the Lok Sabha polls. 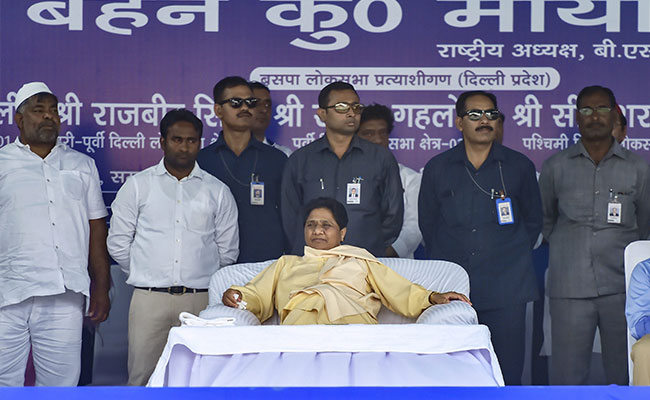 Mayawati spoke at Delhi rally where she received slogans of "Jai Bhim" and "BSP Zindabad".

BSP supremo Mayawati targeted Prime Minister Narendra Modi on Friday, alleging that his "chowkidari" was making the rich wealthier and protecting industrialists, while asserting that his "theatrics and rhetoric" would not yield any result in the ongoing Lok Sabha polls.

Addressing a rally at the Ramleela Maidan in GTB Enclave of northeast Delhi in support of the Bahujan Samaj Party (BSP) candidates fielded in the national capital, she said even under the previous Congress governments, no development work was carried out for the minorities, Dalits and backward castes and there was a status quo under the BJP regime.

The former Uttar Pradesh chief minister arrived at the venue almost two-and-a-half hours late to chants of "Jai Bhim" and "BSP zindabad". A Bhojpuri song -- "Behen Kumari Mayawati ne PM banawange -- was played before her arrival as also after she concluded her address.

"The BJP will be voted out of power because of its RSS ideology, capitalist, communal, casteist policies and style of functioning. Their ''natakbazi'' (theatrics) and ''jumlebazi'' rhetoric will not work. This chowkidari (guarding) is their new tactic which will not be able to save them," Mayawati said at the rally.

Pointing out that Prime Minister Narendra Modi had promised "achhe din" (good days) and "countless things" to the weak, poor, middle-class and hard-working people, she said, "But he is using his ''chowkidari'' to make big industrialists richer and protect them at every stage."

The BSP supremo attacked PM Modi over the issues of the Goods and Services Tax (GST) and demonetisation, claiming that these steps were implemented without proper planning.

"That is why poverty and unemployment have gone up. Small traders and businessmen are still bearing the brunt (of demonetisation, GST). The economy of the country has also been affected. Corruption has also gone up under the current government and even defence deals are not transparent," she alleged.

Hitting out at the BJP over using nationalism as a poll plank, Mayawati said the borders of the country were still not secure as terror attacks were taking place every other day and several jawans were killed.

The BSP chief also accused PM Modi and BJP chief Amit Shah of trying every tactic to ensure that the pre-poll tie-up between her party, the Samajwadi Party (SP) and the Rashtriya Lok Dal (RLD) did not do well in the Lok Sabha polls.

"Modi and Shah have tried every trick in the book to stop the BSP-SP-RLD alliance from winning. They even used the government machinery to trouble the alliance but there is a wave of change in Uttar Pradesh which is in our favour," she said, adding that the "achhe din" promise of the BJP had remained unfulfilled, just like in the case of the Congress.

Mayawati said her party had never had a manifesto since they "believe in speaking less and working more".

Hitting out at the Congress's proposed Nyay scheme, she said the promise of Rs 6,000 per month to the poor would not alleviate poverty.

She asserted that while the Congress was in a bad shape in Uttar Pradesh, the condition of the BJP was much "worse".

Mayawati urged the crowd "not to fall" for the big promises made by the Congress and the BJP, saying Delhi had a large number of people from Uttar Pradesh, Bihar, Madhya Pradesh and Rajasthan, who had migrated here for employment, and that they outnumbered the Delhiites.

"You have to ensure that the wave of change, which is there in other states, especially in Uttar Pradesh, is here also," she said.

Mayawati also talked about how Kanshi Ram had founded the BSP following BR Ambedkar's ideology, adding that the party workers lost the way somewhere down the line, leading to the BJP, Congress and later, the Aam Aadmi Party (AAP) coming to power riding on the Anna Hazare movement.

Polling for all the seven Lok Sabha seats in the national capital will be held on Sunday and the results will be announced on May 23.