"He Envisioned An Atmanirbhar Bharat": PM's Tribute On Gandhi Jayanti 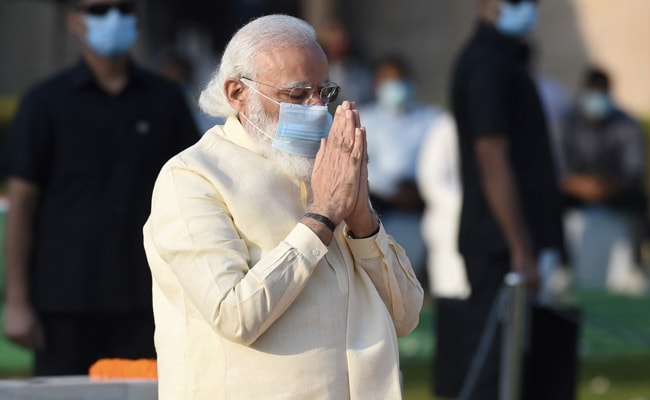 Mahatma Gandhi envisioned an "Atmanirbhar bharat" where every village is self-reliant, Prime Minister Narendra Modi said as he paid tributes to the father of the nation on his 151st birth anniversary today.

There is much to learn from Mahatma Gandhi whose life and thoughts are even relevant today, PM Modi said as he shared a short video of his remarks on the father of the nation.

"October 2nd is a holy and inspirational day for all of us. Bapu (Mahatma Gandhi) thoughts and ideals are more relevant today. Mahatma Gandhi-ji used to say his life is his message and he never tried to influence with his life but his life became an inspiration for others," said PM Modi in the short video which he shared on Twitter.

We bow to beloved Bapu on Gandhi Jayanti.

There is much to learn from his life and noble thoughts.

May Bapu's ideals keep guiding us in creating a prosperous and compassionate India. pic.twitter.com/wCe4DkU9aI

"Gandhi-ji gave utmost importance to cleanliness and wanted every citizen of the country is healthy. Gandhi-ji believed in "Vasudhaiva Kutumbakam" (the world is one family). He envisioned an "Atma Nirbhar bharat" where every village is self-reliant. Gandhiji spoke for the last person in the society. Gandhiji ideals give us inspiration to works for the betterment of the society. I am sure the path showed by Gandhiji will help us work towards a better world. I believe that till the time Gandhiji influence binds us, till then his inspiration and influence will remains with us," PM Modi, who also went to Raj Ghat to pay his tributes, is heard saying in the video.

President Ram Nath Kovind, in his tribute, said that Mahatma Gandhi's 151st anniversary is a good occasion to "think through our priorities in the light of Gandhiji's life and thought, and prepare ourselves again to hear his voice in our hearts". The President also said that Gandhiji importance on healthcare and sanitation duties was a lesson for all amid the Coronavirus pandemic. President Kovind also paid floral tributes to Mahatma Gandhi at his memorial in Rajghat.

The year-long celebrations of his 150th birth anniversary that culminate today have been an apt occasion to rejuvenate his memories and reorient the moral and ethical foundations of public life.

An interfaith prayer was held and Mahatma Gandhi's favourite bhajans "Vaishanv Jan To" and "Raghupati Raghava Raja Ram" were rendered as dignitaries paid homage at his memorial at Rajghat.

Union ministers Hardeep Singh Puri and Gajendra Singh Shekahawt, senior Congress leader Ghulam Nabi Azad were among others who paid homage to the father of the nation at Rajghat.

Born on October 2, 1869, in Porbandar in Gujarat, Mahatma Gandhi adopted non-violent resistance and was in the forefront of the freedom struggle against the colonial British rule.

This led to India finally achieving its independence in 1947. Fondly known as Bapu, his unwavering belief in ''Swaraj'' (self-governance) and ''Ahimsa'' (non-violence) won him accolades across the world.

Globally, Mahatma Gandhi's birth anniversary is celebrated as the International Day of Non-Violence.