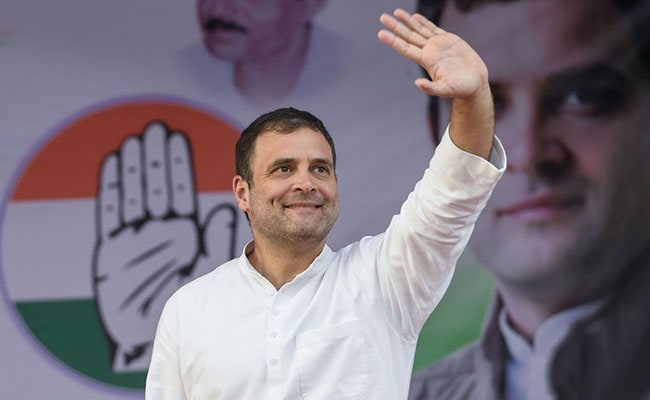 Rahul Gandhi is campaigning for the Maharashtra assembly elections on October 21.

Congress leader Rahul Gandhi today referred to Prime Minister Narendra Modi as a "loudspeaker" for certain industrialists, claiming that his strategy was like that of a pickpocket who diverts people's attention to steal, news agency PTI has reported.

The former party president made these attacks while campaigning in Vidarbha's Yavatmal for the Maharashtra assembly elections on October 21. "Modi is the loudspeaker of (industrialists) Adani and Ambani. Just like a pickpocket who distracts people before stealing, his only job is to divert your attention so that he can pass your money to select industrialists," the news agency quoted him as saying.

Rahul Gandhi claimed that PM Modi has always tried to avoid uncomfortable questions by distracting the people. "The Prime Minister speaks of the Moon mission and the scrapping of Article 370 in Jammu and Kashmir, but remains silent on issues such as the plight of farmers and lack of jobs. The twin assault of Goods and Services Tax and demonetisation broke the back of small and medium enterprises, farmers, labourers and poor people," he said, claiming that unemployment will continue to haunt the country so long as the BJP is at the helm.

The Congress leader claimed that after Bharat Petroleum, the Union government was planning to privatise other national assets such as ports, coal mines and public sector units. He also criticised the manner in which PM Modi had cut corporate tax amounting to Rs 1.25 lakh crore in a single go while the Mahatma Gandhi National Rural Employment Guarantee Act's annual budget stagnated at a mere Rs 35,000 crore.

He claimed that the BJP government's pro-rich policies had caused India's economy to dive. "When the poor person gets money, he starts purchasing. When the demand increases, manufacturing gets a boost," he said, before going on to add that the Congress-proposed NYAY minimum income scheme would have jump-started the economy.

The Rafale deal with France also came up for criticism at the Vidarbha rally. "When Rajnath Singh visited France, he performed a puja of the fighter jet. But Rs 35,000 crore was stolen from the jet deal. The media will not write about this because it is being controlled by industrialists. Your money is given to the media, so they can publicise PM Modi," PTI quoted him as saying.

Maharashtra can take the first step in solving the country's problems by voting in a Congress-NCP government, he said. "We will install a government that works for the poor, the farmers, the labourers and small and medium businesses," he added.

Rahul Gandhi had quit as Congress president earlier this year, after the electorate handed him a crushing defeat in the Lok Sabha polls. His mother, Sonia Gandhi, took over the position as an interim measure in the midst of largescale dissent and defections in the party.

The Congress, which has allied with Sharad Pawar's party, will face the ruling BJP-Shiv Sena combine in the upcoming state elections. Rahul Gandhi also campaigned in Wardha later in the day.