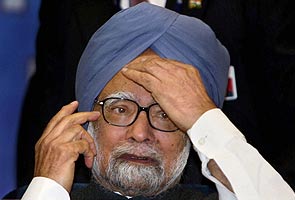 New Delhi: With just a week to go before parliament meets, the Prime Minister is hosting a series of dinners to adrenalize his coalition, and to remind the opposition BJP that crucial legislation is pending, so it is essential that the winter session of parliament be a functioning one.

The PM has in recent days dined with Mulayam Singh Yadav and lunched with Mayawati - both UP power houses do not participate in government but lend external support.   Tonight, he is hosting the members of his coalition.   Tomorrow night, he will meet BJP leader LK Advani and the leaders of the opposition in the two houses Arun Jaitley and Sushma Swaraj.

Ahead of tonight's UPA dinner, senior leaders of  Congress  met with Dr Manmohan Singh.
The group included  Congress president Sonia Gandhi and senior ministers like AK Antony and P Chidambaram who are working on the strategy for a winter session of parliament that promises heat.

Opposition parties want the government to take  a vote on its recent decision to allow Foreign Direct Investment or FDI in retail.    The reform hurtled the government into a minority, with Mamata Banerjee yanking her Trinamool Congress from the coalition.  With her gone, it is the DMK that is the Prime Minister's largest ally, and its leader M Karunanidhi has confirmed that the party does not support FDI.

In a measure of relief for the Congress, the DMK   has confirmed that it will be represented at tonight's dinner by TR Baalu.  But it has still refused to indicate whether it will support the government if a debate in parliament on FDI is followed by a vote, which is what the Left has requested.  Sources say that the DMK will not vote against the government; its MPs may stage a "walk-out" to avoid taking a stand.  In its home turf of Tamil Nadu,  small traders are an important vote bank, and the DMK has backed their stand against FDI.

At tomorrow's dinner with the BJP, the Prime Minister is likely to request that  a repeat of the last parliament session be avoided. The BJP had  stalled parliament  over a report by the government's auditor that said 1.86 lakh crores were lost because coal blocks were not auctioned by the government.  The BJP said it would not allow parliament to function unless the Prime Minister resigned. Virtually no business was transacted

Dr Singh is likely to stress that his government is keen to provide opposition parties with explanations and answers through debates, but that important legislation is pending and must not be waylaid by the argument over FDI.

The efficacy of his dinner diplomacy remains unproven.  Though Mulayam Singh Yadav dined with Dr Singh recently, he prodded the Congress with a mega-volt jolt today by releasing a list of candidates for the 2014 general elections.  The move signals that the Congress should not take his support for granted, and that he anticipates the UPA will not complete its term.

However, his son Akhilesh, who is the chief minister of Uttar Pradesh, said that the party merely wants its candidates to have enough time to prep well for the general election.
The Congress may find that explanation a little hard to digest.