Competing in the round-the-world Golden Globe Race, perhaps the most challenging endurance race on the planet, Commander Tomy had sailed into hurricane force conditions in the most remote and uncharted part of the Indian Ocean

On September 21, as Commander Abhilash Tomy lay incapacitated in the bunk of his battered sail boat, a 46-year-old Navy Captain was getting ready to carry out the most audacious rescue attempt ever attempted by the Indian Navy.

The Captain, who we cannot name, is no ordinary sailor. A highly qualified special forces operator, he commands a unit of the elite Marine Commandos (MARCOS) based in the West of the country.

If it became clear that ships in the south Indian Ocean wouldn't get to Commander Tomy early enough, the Captain and his squad of three commandos would fly to the area, jump out of an Air Force C-17 transport and combat-free fall into the Indian Ocean, parachuting in as close as possible to Thuriya, Commander Tomy's tiny boat.

According to the Marcos team leader, "The plan was to select the best skydivers, who were equally proficient in water, to land right next to the boat and reach him.''

The team which was selected was ''the best in the business and was handpicked'' for the rescue attempt. 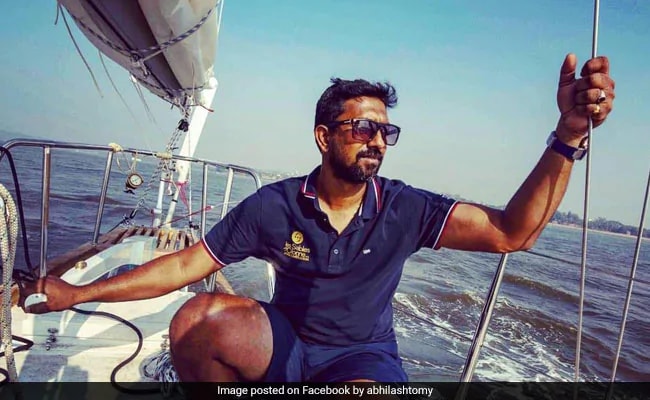 According to the senior Admiral in charge of giving the rescue attempt a go, no-go order, ''all the options were being worked out simultaneously. Paradropping our special forces guys was one of the plans. I have no doubts about the skills and capability of our elite Marcos. They are among the best in the world."

Competing in the round-the-world Golden Globe Race, perhaps the most challenging endurance race on the planet, Commander Tomy had sailed into hurricane force conditions in the most remote and uncharted part of the Indian Ocean.

Sailing more than 5,000 kilometres south of Kanyakumari, Commander Tomy's boat had been hammered by 14-metre-high waves with wind speeds touching 150 kilometres per hour. He lost the main mast of the boat and slammed his back on to its deck during the storm while being flung around like a rag-doll.

Struggling to move and in excruciating pain, Commander Tomy somehow managed to flop on to his bunk inside the boat's cabin where he was able to trigger his EPIRB (emergency position indicating radio beacon). This told race organisers in France that the Indian Navy Commander was in serious trouble and needed to be evacuated. Immediately.

Except, there was a major problem. Sailing well south of established sea lanes, the nearest ships were days away from reaching him. With overcast conditions prevailing in the region, there was absolutely no guarantee when help would arrive.

Commander Tomy was adrift and helpless. From the East, Australia deployed a frigate to race to the area, while the Indian Navy's own stealth frigate INS Satpura, operating off the coast of South Africa, raced at top speed to reach the distressed Indian sailor. But it would take at least five days for these ships to arrive.

With no help in sight, the Captain of the Marcos team got his men kitted. The three commandos who had been selected were all Chief Petty Officers, experienced and physically and mentally tough.

''We knew Tomy was alive but were not aware of the extent of his injury," says the Admiral overseeing the mission.

''So the plan was to ensure that our Marcos remain with him till help reaches.''

When the first images and video of Commander Tomy's boat arrived from an Indian Navy P-8 maritime reconnaissance aircraft which had flown into the remote area after refuelling in Mauritius, it was clear that there was little time to waste. The Thuriya had been devastated and there was no sign of Commander Tomy, who was intermittently communicating from inside his cabin.

''All arrangements catering for the sea state, water temperature, and first aid of the injured officer had been taken into consideration," says the Marcos Captain. He had even spoken to the Goa-based manufacturer of the Thuriya and the team knew exactly what they needed to do once they got there.

But there was one major worry -- the wind speed in the area. ''Anything in excess of 25 knots in squally conditions is not recommended.''

But if there was no option, the Marcos would jump anyway. They had all volunteered to do this. There was no order to deploy.

As is customary, the Marcos Captain would lead from the front. Once the giant Indian Air Force C-17 transport flew over the area, the Captain and his "buddy" would jump off the jet with the second team of two Marcos remaining on standby. They would only deploy if something went wrong with the first attempt or there was an additional requirement.

Finally though, after a harrowing four days stranded out at sea, Commander Tomy was rescued by a French fisheries boat Osiris. He had to be stretchered out of Thuriya before being taken to the remote French research station on Amsterdam Island where he received proper medical attention for his injuries.

For the top leadership of the Indian Navy, Commander Tomy's rescue by the French boat could not have come a day later.

Any further delay would have meant operationalising Plan B -- parachuting in a group of Marine Commandos who had volunteered to put their lives on the line in order to save a fellow sailor from the Indian Navy.