Pics: Padma Winners, Who Were Barefoot, In The Spotlight 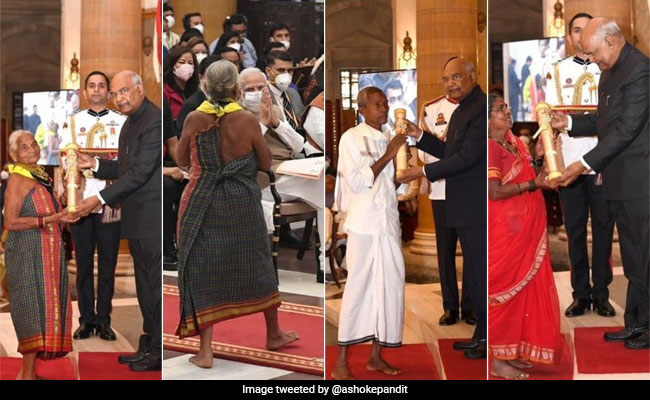 The spotlight is on unsung heroes in the Padma awards functions this week and four recipients who went barefoot to the ceremony have drawn much praise and admiration on social media.

"They are barefoot, but have the Padma Shri in their hands," wrote filmmaker and activist Ashok Pandit in an appreciation post, sharing images of all four and tagging Prime Minister Narendra Modi.

All these Padma awardees have gained wide recognition for their achievements, largely unknown till now. They won hearts with their traditional attire.

The 72-year-old tribal activist from Karnataka is known as an "encyclopaedia of forests"; she never went to school but gained all her knowledge working in government nurseries from a young age. She belongs to the Halakki indigenous tribe in Uttara Kannada.

Barefoot & dressed in traditional attire, #Environmentalist Tusali Gowda, aka 'Encyclopedia of the Forest' was awarded the Padma Shri.

She planted more than 30,000 saplings & has dedicated her entire life in #environmental conservation. #PadmaAwardspic.twitter.com/olw3aElRHV

Harekala Hajabba, an orange seller in Mangalore, Karnataka, saved money to build a school in his village. He is known as a "Saint of Letters". Reports quote him as saying he felt compelled to go as he did because for years, he could not even afford footwear.

He received the award wearing his trademark white dhoti and shirt.

President Kovind presents Padma Shri to Shri Harekala Hajabba for Social Work. An orange vendor in Mangalore, Karnataka, he saved money from his vendor business to build a school in his village. pic.twitter.com/fPrmq0VMQv

Rahibai Soma Popere, who won the Padma Shri for her contribution to agriculture, is a tribal farmer belonging to the Mahadeo Koli community in Maharashtra. She is known as "Seed Mother".

The 84-year-old has won many awards for his incredible shadow puppet craft, passed down generations.

President Kovind presents Padma Shri to Shri Dalavayi Chalapathi Rao for Art. He is a renowned artist in the field of leather puppetry, a shadow puppetry craft in Ananthapur, Andhra Pradesh. pic.twitter.com/aJ9uSKtpLK