Remains of Buddhist structures and mural inscriptions bearing names of cities like Mathura and Kaushambi in old scripts were also found at Bandhavgarh. 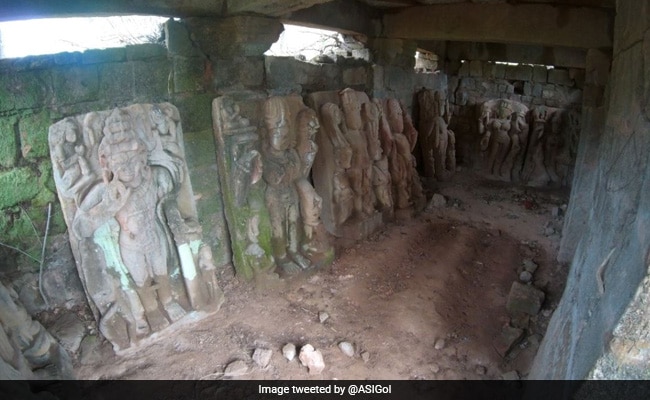 The exploration at Bandhavgarh was undertaken for the first time since 1938, officials said.

The Archaeological Survey of India has found ancient caves and temples, remains of Buddhist structures and mural inscriptions bearing names of cities like Mathura and Kaushambi in old scripts during its recent exploration at Bandhavgarh in Madhya Pradesh, officials said on Wednesday.

An ASI team covered nearly 170 sq km falling in the area of the famous Bandhavgarh Tiger Reserve that is not accessible to public during the over a month-long exploration of the region which it undertook for the first since 1938, they said.

During the exercise held from May 20-June 27, the ASI's Jabalpur Circle also reported many ancient sculptures, including large monolithic ones of various avatars of Lord Vishnu like 'Varaha' and 'Matsya', and "board games made in natural caves", officials said.

An ASI team covered nearly 170 sq km falling in the area of the Bandhavgarh Tiger Reserve over months-long exploration of the region which was undertook for the first time since 1938.

The exploration was conducted by the Jabalpur Circle of ASI. (3/3) pic.twitter.com/c3qD0qpzIu

Superintending Archaeologist of the Jabalpur Circle, S K Bajpai, who led the team, shared details and images from the exploration during a media interaction at the ASI headquarters in New Delhi.

"This is the first time ASI has explored Bandhavgah since the 1938 exploration by archaeologist N P Chakravarti. Many structures there were documented. We reported and documented more structures, including ancient caves, temples, Buddhist remains, maths, sculptures, water bodies, mural inscriptions in old scripts like Brahmi and Nagari," Mr Bajpai said.

Other agencies have done some exploration in the intervening period though, he added.  A special permission was taken from the forest authorities to explore the area in Umaria district of Madhya Pradesh, he said, adding that he "encountered a tiger and elephants" during the job, but "caves gave us shelter".

Bandhavgarh Tiger Reserve, home to the majestic big cats, is located about 500 km from state capital Bhopal. "For me, the most startling finding is the remains of the Buddhist structures in the region where a Hindu dynasty ruled. It suggests religious harmony, but who built these Buddhist structures is not known yet, " the ASI official said.

A votive stupa and a Buddhist pillar fragment containing miniature stupa carving, which roughly date back to 2nd-3rd century AD have been documented as part of this exploration, according to information shared by the ASI.  But what is also very noteworthy is the names of old cities like Mathura and Kaushambi, located in Uttar Pradesh, found in ancient inscriptions we have documented, Bajpai said.

"Names of these cities located far away from Bandhavgarh suggest that there were trading ties and people from other cities may have donated something, but again, it is a matter of conjecture," another senior ASI official said.

Coins belonging to Mughal-era and Sharqi dynasty of Jaunpur Sultanate have also been found, he said.

"In Bandhavgarh Forest Reserve, remarkable archaeological remains are unravelled by @ASIGoI. 26 temples, 26 caves, 2 monasteries, 2 votive stupas, 24 inscriptions, 46 sculptures, other scattered remains & 19 water structures are recorded. The Varah here is one of the largest," he tweeted and shared a few pictures.

The ASI also shared pictures of the explored site and tweeted: "An ASI team covered nearly 170 sq km falling in the area of the Bandhavgarh Tiger Reserve over a month-long exploration of the region which was undertaken for the first time since 1938."

ASI officials said a total of 35 temples have been documented, nine earlier and 26 temples or remains of temple of Kalachuri period in the latest exploration.

Of the caves, 26 are newly documented, dating to 2nd century BC to 5th century AD period and mostly Buddhist in nature, while 50 were reported earlier, he added.

Besides, 46 new sculptures also documented, and 10 were already reported earlier prior to this exploration this year.

Besides, names of Mathura and Kaushambi, Pavata (Parvata), Vejabharada and Sepatanaairikaa are also mentioned in various inscriptions. Names of important kings mentioned in the old inscriptions include, Maharaja Shri Bhimsena, Maharaja Pothasiri and Maharaja Bhattadeva, the ASI said.