The police shared several pictures from the dog-themed pandal on Instagram showcasing its unique features. 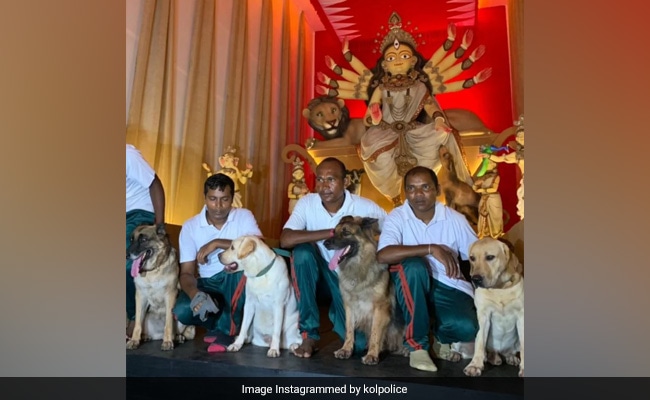 The four special chief guests are seen on the stage with their handlers.

A team of four from Kolkata Police's dog squad were the chief guests at the inauguration of the state's "first-ever" pet-friendly Durga Puja.  The police shared several pictures from the dog-themed pandal on Instagram showcasing its unique features.

In one of the photos, we can spot sculptures of two dogs near the feet of Goddess Durga. In another picture, the four special chief guests – two Labradors and two German Shepherds – are seen on the stage with their handlers while a family poses with them.

The pandal also features an artwork in which an asura is seen riding a motorcycle while puppies are loitering on the roadside. As per the police, the pet-friendly Durga Puja pandal is the brainchild of the Bidhan Sarani Atlas Club. This is the first time when the Kolkata Police Dog Squad participated in a Durga Puja.

“The evening of Mahalaya saw four members of our Dog Squad - Labradors Molly and Camphor and German Shepherds Liza and Dinky - make a very special appearance as chief guests at the inauguration of Kolkata's first pet-friendly Durga Puja, courtesy Bidhan Sarani Atlas Club, and as you can see from the photos and videos, they enjoyed themselves thoroughly. This marks the first time that our Dog Squad has participated in a Durga Puja,” Kolkata Police wrote in the post.

As pictures of the unique pandal went online, they drew praise from social media users who took the opportunity to wish Happy Durga Puja. “Molly dinky camphor ma Durga bless u all furries,” a user wrote. Another user could not get over the dogs and wrote “So cute all of them”.