Won't Be Worthy Heirs Of Tagore If We Don't Reject Communalism: Amartya Sen

Amartya Sen said the Left and other secular parties in West Bengal have no less commitment than the ruling TMC to ensuring that communalism does not rear its ugly head in the state. 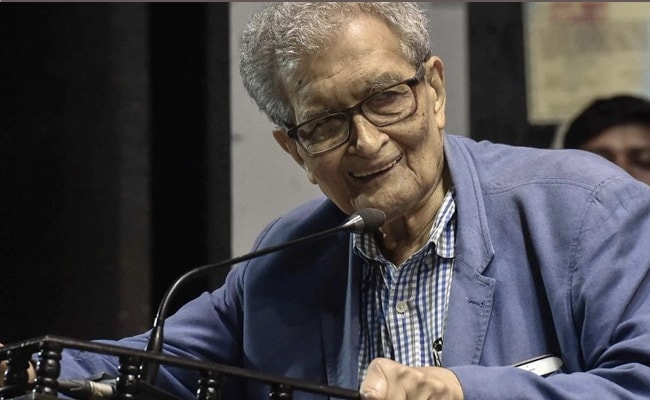 Amartya Sen declined to hold the BJP responsible for the row, as was suggested by many quarters.

Political parties sure have good reasons to pursue individual goals, but rejection of communalism ought to be a shared value without which "we shall not be worthy heirs of Tagore and Netaji", Nobel laureate Amartya Sen has said.

He said the Left and other secular parties in West Bengal have no less commitment than the ruling TMC to ensuring that communalism does not rear its ugly head in the state.

"Secular parties can differ in their detailed programmes, but the importance of rejecting communalism must surely be a strong shared value. The Left parties should have no less a commitment to that than the TMC (in keeping the state secular)," Amartya Sen told PTI in an email interview.

The BJP, which has often been subjected to strong criticism by the celebrated economist over its policies, meanwhile, claimed the TMC's communal side has long been exposed.

Exuding confidence that the people of the state will reject non-secular forces, the 87-year-old Harvard professor said, "Bengal had in the past greatly suffered due to communalism."

"Each party may have a good reason to pursue its own goals without harming the overarching objective of keeping Bengal secular and non-communal. First things should surely come first. Otherwise, we shall not be worthy heirs of Tagore and Netaji," he said.

With Bengal's icons occupying centre stage in political discourse in the run up to the assembly elections, Amartya Sen said one must remember that all luminaries "have wanted and argued" for unity.

Rabindranath Tagore, Netaji Subhas Chandra Bose, Ishwar Chandra Vidyasagar and Swami Vivekananda, all wanted and argued for a united Bengali culture, and there is no room in their social objective for trying to excite one community against another.

"That is the Bengali culture that we have come to admire and support. Kazi Nazrul Islam is as big a Bengali leader as the others. Bengal has greatly suffered from communalism in the past and has learned to reject it firmly," the Nobel winner, a known critic of the BJP, said.

Asked about the recent row over his family allegedly being in "illegal" possession of land at Visva Bharati, the noted economist rejected the charge and said the vice chancellor of the hallowed institution has issued "false statements" to the media.

"I am baffled by the way the Visva-Bharati VC is doing these very odd things, such as making false statements to the media about me allegedly occupying their land but never writing to me about returning any land to them. I am not sure if the VC is what can I say? - (is) intellectually well- coordinated," he said.

Asked if he feels that it was an attempt to malign him, the professor said, "Maybe, as you say, he (VC) is trying to malign me, but it would be hard to be sure given the lack of cogency in his actions."

Amartya Sen, however, declined to hold the BJP responsible for the row, as was suggested by many quarters.

"Certainly I am critical of any political party that inflames communal and divisive sentiments, particularly between Hindus and Muslims. Certainly, Bidyut Chakravarty, the Visva- Bharati VC, gives evidence of following the commands of the BJP. But it is a big jump from there to conclude firmly that the BJP is responsible for these false accusations," he said.

A controversy erupted last week when media reported that the central university has written to the West Bengal government alleging dozens of land parcels owned by it were wrongfully recorded in the name of private parties, including Amartya Sen.

The Nobel laureate had said that the university land on which his house stands is on a long-term lease, which is nowhere near its expiry.

Chief Minister Mamata Banerjee had offered an apology to Sen on behalf of the state and also wrote to him, asking him to consider her a "sister and friend" in his war against "intolerance and totalitarianism".

Reacting sharply to Sen's assertions apparently targeting the saffron camp, BJP's national general secretary and Bengal minder Kailash Vijayvargiya said his claims were bereft of truth as the "the communal side of the TMC government was exposed when immersion of Durga idols was stopped due to Muharram".

"People in Bengal have already voted in favour of the BJP in the last Lok Sabha polls. They will vote for us again in the upcoming assembly polls," he asserted.

Elections to the 294-member West Bengal assembly are due in April-May next year.