The monsoon session started earlier on September 14, five months after parliament was adjourned over the novel coronavirus pandemic.

The monsoon session of parliament began earlier this month.

Amid fierce protests over the controversial farm bills, the monsoon session of parliament will conclude today, eight days ahead of schedule as the opposition boycotted proceedings in both houses. The monsoon session started earlier on September 14, five months after parliament was adjourned over the novel coronavirus pandemic.

Yesterday, seven bills were passed in Rajya Sabha even as the Congress, Left parties, the TMC, the Samajwadi Party and the NCP decided to boycott House proceedings in protest against the suspension of eight MPs for the remainder of the session for unruly behaviour.

Here are the Highlights on the monsoon session of parliament:

Sep 23, 2020 19:51 (IST)
Joint Committee of Parliament on personal data protection bill gets extension
The Joint Committee of Parliament examining the Personal Data Protection Bill was on Wednesday given an extension to submit its report during the winter session of Parliament.
PP Chaudhary of the ruling BJP moved a motion seeking extension up to the winter session of parliament for the panel to submit its report.
"That this House do extend up to the second week of the Winter Session of the Parliament, 2020 the time for the presentation of the Report of the Joint Committee on the Personal Data Protection Bill, 2019," the motion read. It was passed by a voice vote.
Sep 23, 2020 18:23 (IST)
Congress leaders protest against Agriculture bills with farm produce in their hands
Congress leaders, including Adhir Ranjan Chaudhary, are holding farm produce in their hands and raising slogans against Narendra Modi in protest against the agriculture bills. 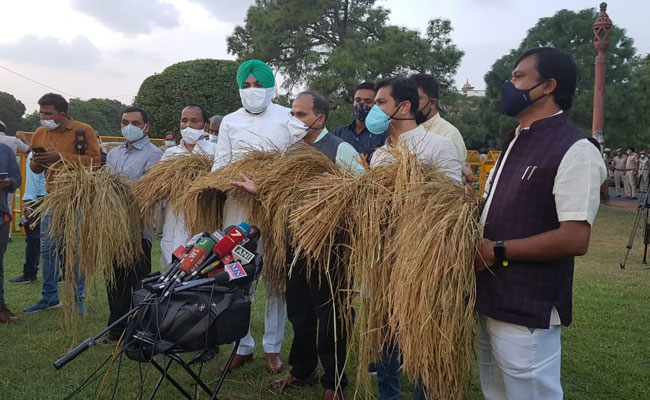 Sep 23, 2020 18:10 (IST)
We have given a representation to President that Farm Bills have been passed unconstitutionally: Ghulam Nabi Azad

There was no division of votes, no voice voting. Constitution was undermined in the temple of democracy. We have given a representation to President that Farm Bills have been passed unconstitutionally & he should return these bills: Ghulam Nabi Azad, Leader of Oppn., Rajya Sabha pic.twitter.com/O0jkUrUGhI

Sep 23, 2020 17:18 (IST)
Parliament passes 3 key labour reform bills
Parliament on Wednesday approved three key labour reform bills that will remove impediments to winding up of companies and allow firing of staff without government permission in firms with up to 300 workers from the existing 100, a move aimed at attracting more investments and job creation.
Rajya Sabha passed by voice vote the three labour codes on industrial relations, social security and occupational safety amid a boycott by opposition parties, including the Congress and the Left, over the suspension of eight MPs.
The first code on wages was approved by Parliament last year. With passage of these three bills, 29 central labour laws have been codified into four broad codes as contemplated by the government under labour reforms to improve ease of doing business and providing universal social security to workers as well.
The three codes were passed by Lok Sabha on Tuesday and these will now be sent to the president for his assent.
Sep 23, 2020 16:44 (IST)
Parliament passes Bilateral Netting of Qualified Financial Contracts Bill
Parliament on Wednesday passed a bill that seeks to provide a legal framework for bilateral netting of qualified financial contracts, with Finance Minister Nirmala Sitharaman asserting that the bill is critical for financial stability in the country.
Lok Sabha had passed the bill on Sunday.
The legislation allows for enforcement of netting for qualified financial contracts.
Sitharaman said the bill brings in a firm legal basis for bilateral netting for two counter parties.
"It is just the bilateral contracts which do not have any firm legal basis. Value of bilateral derivative contracts is estimated by the Clearing Corporation of India to be Rs. 56,33,257 crore as of March 2018," she said.
Sep 23, 2020 15:43 (IST)

Parliament Passes Jammu And Kashmir Official Languages Bill, 2020
Parliament today passed a Bill for inclusion of Kashmiri, Dogri and Hindi in the list of official languages in the Union Territory of Jammu and Kashmir, in addition to the existing Urdu and English.
Sep 23, 2020 15:01 (IST) Sep 23, 2020 13:48 (IST)
The three Labour Code bills "will give a safe environment to workers. Social security benefits have also been added This will be in sync with PM's resolve for universal social security," Santosh Gangwar, MoS, Labour Ministry, said in Rajya Sabha.
Sep 23, 2020 13:44 (IST)

Watch | Opposition To Meet President At 5 PM On #FarmBills Amid Parliament Boycott https://t.co/KoLysNMKHZpic.twitter.com/LwpuM58l3J

Sep 23, 2020 13:41 (IST)
"We will meet the President today and request him not to approve the three Farm Bills and return them to Parliament for reconsideration": DMK Leader and Rajya Sabha MP T Shiva to NDTV
Sep 23, 2020 13:38 (IST)
Labour Code Bills Passed In Rajya Sabha In Absence Of Opposition
As opposition continues its boycott of the parliament, the Rajya Sabha today passed the three controversial Labour Code Bills. The bills were passed even as Ghulam Nabi Azad, the Leader of opposition in Rajya Sabha, wrote to Rajya Sabha Chairman: : "These bills affect the livelihood of crores of workers. It will be a great blot on democracy to have these bills passed unilaterally today." The government has said the three Labour Code Bills will give a safe environment to workers.
Sep 23, 2020 13:33 (IST)
The Rajya Sabha passed the Bilateral Netting of Qualified Financial Contracts Bill, 2020 by a voice vote following discussions on Wednesday.
Union Finance Minister Nirmala Sitharaman moved the motion for the consideration of the Bill in the House. In her introduction, she said the Bill has been brought in to ensure financial stability and promote competitiveness in Indian financial markets by providing enforceability of bilateral netting of qualified financial contracts and for matters connected therewith, news agency ANI reported.
Sep 23, 2020 11:43 (IST)
Why The Labour Code Bills Are Contentious
The government has claimed the Labour Code bills will help in bringing reforms to ensure easier compliance of labour standard, encourage investments and extension of social security benefits to more inter-state migrant workers.
Why are the bills contentious?
1)Industrial Relations Code Bill, 2020
Eases lay-off norms: Allows companies with up to 300 workers to lay off people without the concerned state government's approval. So far only companies employing up to 100 people were allowed to do this.
Restrictions on workers going on strike: No industrial worker will be able to go on strike without a 60-day notice. So far such rules were applicable on only those involved in public utility services like water, electricity, natural gas, telephone and other essential services. They were required to give a six-week notice.
2)Code on Social Security Bill, 2020 extends social security funds to app-based workers more commonly employed by companies like Uber, Ola, Swiggy and Zomato
However, Labour unions claim that more is needed. These workers continue to remain in a legal grey zone. They are often treated as independent partners who don't find a place under most labour regulations, they say.
3)Occupational Safety, Health and Working Conditions Code Bill, 2020
The legislation seeks to regulate health and working conditions in factories, mines and in docks.  However, critics say the legislation is not universal in nature and workers of smaller units are not covered
Sep 23, 2020 11:37 (IST)
Monsoon Session Of Parliament: Labour Code Bills Tabled In Rajya Sabha
Contentious Labour Bills, which were cleared by Lok Sabha yesterday, have been tabled in Rajya Sabha. The three labour bills are:
Sep 23, 2020 11:00 (IST)
Bills In Lok Sabha Today
Bills for consideration and passing
-The Major Port Authorities Bill, 2020
-The Assisted Reproductive Technology (Regulation)
Bill, 2020.
-The Factoring Regulation (Amendment) Bill, 2020.
Sep 23, 2020 10:55 (IST)
Parliament passes The Foreign Contribution (Regulation) Amendment Bill, 2020, that will regulate foreign funding of NGOs
Sep 23, 2020 10:36 (IST)

Experience says that many organisations attempted to hide their identity & were successful in doing that. The reason behind this is that they had no fear because their identity wasn't established completely. So Aadhaar Card has been brought in to establish their identity: MoS MHA https://t.co/OuL89rIvjh

Experience says that many organisations attempted to hide their identity & were successful in doing that. The reason behind this is that they had no fear because their identity wasn't established completely. So Aadhaar Card has been brought in to establish their identity: MoS MHA https://t.co/OuL89rIvjh