Read inOther Languages
This Article is From Sep 23, 2020 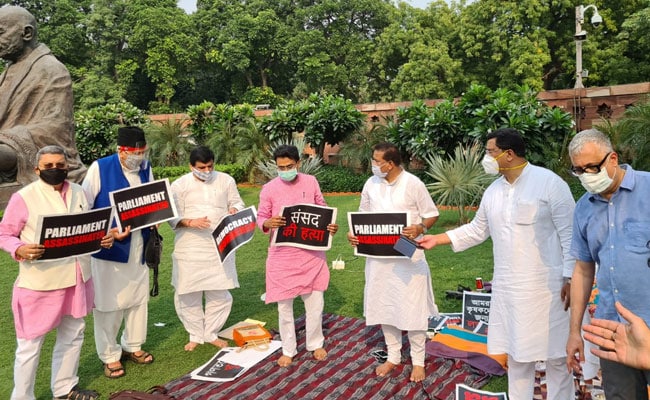 The opposition has boycotted proceedings in both houses after eight MPS were suspended.,

The monsoon session of Parliament -- which started after nearly five months of indefinite adjournment -- is likely to conclude today, eight days ahead of schedule as the opposition boycotted proceedings in both houses. Amid concerns over coronavirus, the session will again end on an indefinite note. On the last day, the government, without any opposition,  plans to pass all the labour code bills, FCRA amendment bill, J&K language bill and the netting bill among others. Rajya Sabha is expected to be adjourned for this session at 4 pm.

With eight opposition MPs suspended from the house over Sunday's ruckus, the opposition has boycotted the proceedings in both houses, demanding that the suspension be revoked. Congress leader in Lok Sabha Adhir Ranjan Chowdhury said all opposition parties are boycotting Parliament in solidarity with the suspended Rajya Sabha members.

The opposition also boycotted the Business Advisory Committee meeting of the Rajya Sabha that was called on a short notice on Tuesday.

Led by Rajya Sabha chairman Venkaiah Naidu, the committee met to discuss the impending adjournment of the house in view of the coronavirus situation.

In the mandatory covid tests for parliamentarians before the monsoon session started, 17 members of the Lok Sabha and eight from the Rajya Sabha had tested positive.

Over the 10-day session, several others, including Union minister Nitin Gadkari, tested positive.

Cutting across both houses, around 200 parliamentarians  are in the vulnerable age group for Covid and many of them had avoided the session over health concerns.