Rahul Gandhi returned from Italy just six days ago, so he should be checked for coronavirus, says BJP MP Ramesh Bidhuri. 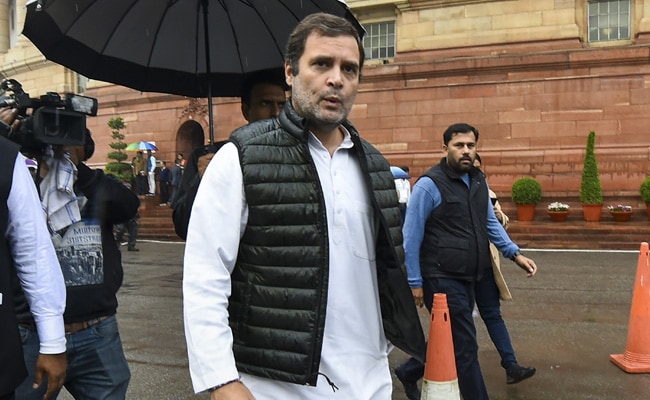 Rahul Gandhi should get himself tested for coronavirus and inform parliament, the BJP leader said. (File)

Congress president Sonia Gandhi and her son Rahul Gandhi must get tested for coronavirus as they have just returned from Italy and may end up spreading it, BJP MPs said in parliament today, stirring up such a commotion that Lok Sabha had to be adjourned.

The Lok Sabha Speaker did not allow the remarks but furious opposition members demanded an apology from independent MP Hanuman Beniwal, who raised the topic in the house. His comment on the Gandhis popped up during a discussion on the virus that has caused panic worldwide. Members in both houses set aside their differences for the discussion.

Earlier, Health Minister Harsh Vardhan had made a statement on coronavirus in India and measures to tackle it. Rahul Gandhi compared the statement to "the captain of the Titanic" telling passengers not to panic.

"The Health Minister saying that the Indian Govt has the coronavirus crisis under control, is like the Capt of the Titanic telling passengers not to panic as his ship was unsinkable. It's time the government made public an action plan backed by solid resources to tackle this crisis," the former Congress president remarked.

The Health Minister saying that the Indian Govt has the #coronavirus crisis under control, is like the Capt of the Titanic telling passengers not to panic as his ship was unsinkable.

It's time the Govt made public an action plan backed by solid resources to tackle this crisis.

BJP MP Ramesh Bidhuri also targeted him for the second time in two days, saying "many people from Italy" had tested positive for the virus.

"Rahul Gandhi returned from Italy just six days ago, so he should be checked for coronavirus," Mr Bidhuri said outside parliament.

"MPs who sit with Rahul Gandhi may also catch the virus. Many from Italy have tested positive for coronavirus. He should get himself tested and inform parliament," the BJP leader told reporters.

Mr Bidhuri had made similar remarks yesterday after Rahul Gandhi's visit to violence-hit northeast Delhi. He had accused the Congress MP of not taking virus precautions.

"Precautions must be taken...first you misguided people (on CAA)... your mother said people should be either this side or the other...first you instigate violence, than you go to show solidarity...before going there, I want to ask, you have come from Italy just six days back, have you taken screening test at the airport? Did you take precautions or you want to spread it (Coronavirus)?" Mr Bidhuri told news agency ANI.

Seventy-nine people have died because of the new coronavirus in Italy, with more than 2,500 confirmed cases since the outbreak began last month.

29 cases of coronavirus have been detected in India out of which 16 are Italian tourists.

Amid rising concerns, an independent lawmaker came to parliament wearing a mask and kept it on as he asked a question in Lok Sabha.

The BJP often targets Mr Gandhi over his foreign trips, especially with reference to Italy, home to his mother's family.

Responding to the Congress leader's dig at Prime Minister Narendra Modi on a post about giving up social media, Union Minister Babul Supriyo had tweeted, "Brother, when you tweet from your holidays abroad, your network provider charges at least four times more for data usage...but 10 days/15 days international roaming packs are available...try availing that in your next trip...for your short stays in India, you may use normal data packs."