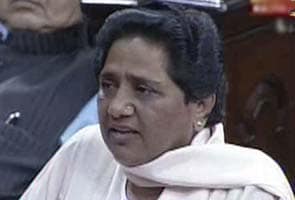 New Delhi: The Rajya Sabha is discussing security for women, not very far from where angry demonstrations are being held in New Delhi to protest against the brutal rape of a five-year-old girl last week.

Leaders from different parties, including Bahujan Samaj Party chief Mayawati, have expressed concern that despite Parliament enacting tougher laws against sexual assault on women recently, incidents of brutal crime have only increased. As the Upper House debates the issue, four minor girls are in hospital in different parts of India; they were raped and subjected to unspeakable violation by their assailants.

This is the first time since this morning that the Upper House has settled for discussion. In an effort to ensure that the Rajya Sabha functions, Chairman Hamid Ansari had earlier in the day offered structured debates on all issues that a belligerent opposition wants to raise.

The BJP and other parties like the AIADMK have demanded a discussion today on the allegation that Law Minister Ashwani Kumar and members of the Prime Minister's Office changed the status report that the CBI submitted in the Supreme Court on the coal allocation scam investigation last month. They have demanded the presence in House of Mr Kumar, who is a Rajya Sabha member of the Congress.

The Lok Sabha has been adjourned for the day; the Lower House too saw continuous ruckus by Opposition MPs over the Delhi rape case and other issues like the coal scam and the joint parliamentary committee draft report that gives a clean chit to the Prime Minister and Finance Minister P Chidambaram in the 2G telecom scam.

Just before Parliament resumed for the rest of the Budget session this morning, the Prime Minister said, "It's my sincere wish that the House is allowed to function. We have many important bills to discuss."

The BJP and the Left have said that in both the coal scam and the telecom or 2G scam, the government has engineered deceit to defend the Prime Minister.

Promoted
Listen to the latest songs, only on JioSaavn.com
In the first part of the Budget session, the PM's minority government lost its second-biggest member, the DMK.

It needs all the numbers it can cobble up to pass several money Bills, including the Finance Bill, and other key legislation like the Land Acquisition Bill, Food Security Bill, Insurance and Pensions Bills.