Paris: From city of lights to yawn central? 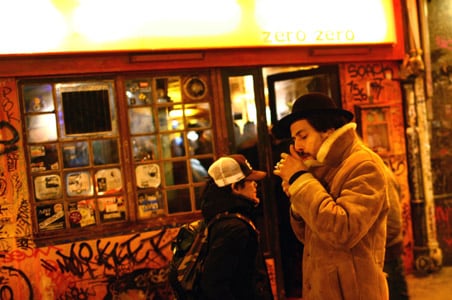 Paris: The neighbors do not like the Zero Zero bar, the graffiti-plastered dive on an otherwise sleepy stretch of Rue Amelot, in the 11th Arrondissement. It is not so much the look of the place, they say, nor any particular distaste for its youthful clientele. It is the noise.

The neighbours have been known to pelt the Zero Zero's patrons with eggs and to dump water on their heads from balconies. One once attacked the revelers below his window with a garden hose.

"It's insane, the neighbors take us for crazy people," said Nicolas Dechambre, 26, a co-owner and bartender at the bar. The club has paid close to $12,000 in fines for street noise in the past year and a half, he said, and has been closed by the police for a cumulative period of nearly two months, the result of complaints from neighbors.

"Paris, it's not the City of Lights anymore," Dechambre said. "It goes to sleep at 11."

His is a prevalent view these days. Despite its reputation as the bustling spiritual home of the bohemian, the city has in recent years grown ever less mirthful and ever more staid and bourgeois, club owners say. Faced with mounting noise complaints, fines and closings, many Parisian bars and concert halls are struggling to stay afloat. DJs and musicians have also been abandoning the French capital, forcing a startling conclusion upon the city's nightlife professionals: Paris might soon be dead at night.

"The generalized law of silence that is battering down upon our events and our living spaces is soon to relegate the City of Lights to the rank of European capital of sleep," a group of music promoters wrote in a recent online petition, to be submitted to the mayor of Paris and several government ministries on January 31. The more than 14,000 signatories call for, above all else, more tolerance from residents and officials: It would be "dangerous hypocrisy," the document says, "to let people think that the Parisian night could or should thrive without disturbing the perfect tranquility of a single resident."

A headline in the newspaper Le Monde last month deemed Paris the "European capital of boredom." To try to combat that image, the city has set up a Web portal, Paris Nightlife, to promote its 7,500 bars, nightclubs and concert halls, an effort to "reglorify the night," said Audrey Epeche, a city tourism adviser.

That, however, seems unlikely to remove the many impediments to the French capital's party scene, laid out in a city-commissioned study on the nightlife economy by the French School of Economic Warfare. A sampling of the city's problems: densely packed, mixed-zoned neighborhoods; a lack of late-night transportation (the last metro leaves at 2 a.m. on the weekends, 1 a.m. during the week); and an unwieldy tangle of rules and regulations on bars and nightclubs, applied with uncommon zeal by a "repressive" police force.

Club owners say the central issue is the city's accelerating gentrification. Real estate values have more than doubled here in the past 10 years, and residents increasingly demand peace and quiet, the club owners say.

All of these tensions, though, have been exacerbated by the 2008 tobacco ban, which has sent legions of smokers onto the sidewalks at all hours of the night. Noise complaints and fines have spiked, club owners say; the Paris police prefecture declined to provide statistics.

Neighbors, however, say they are losing patience.

"At 3 in the morning, when you can't sleep, you just want to destroy them," said Xavier Gras, a neighbor of the Zero Zero, the person behind the garden hose incident, and - to his growing self-disgust - a frequent filer of complaints against the bar.

But he says the police remain his best recourse. "We've had it up to here," he said.

Club owners, though, say much the same thing.

"I've been in this business for 15 years, and this is the first time I've taken such a beating," said Xavier Simon, 40, who owns La Mecanique Ondulatoire, a three-story bar and concert hall.

After a noise complaint by the newly arrived occupants of an adjacent apartment, the club was closed on police orders for nine days in August - a $30,000 loss, according to Simon - and has since been ordered to install extensive sound-proofing, at a cost of $160,000.

The club is currently facing another potential closing after the police discovered there was dancing there in October; Simon does not hold the required license. He said such a closing would force him to shut down the club permanently.

"There's really a desire to see places that are a bit underground shut down," he said.

Before the smoking ban, he said, the police had afforded bars and clubs significantly more leeway. The police have lately, for instance, begun enforcing a long-overlooked law requiring establishments to hold a "night authorization" permit in order to stay open past 2 am, an annual license that club owners say is difficult to obtain.

Simon has considered moving his operation to Berlin: The authorities there are less stringent and the public is more accepting, he said. The recent nightlife economy report ranked Paris well behind Berlin - as well as London, Amsterdam and Barcelona, Spain - in terms of "nocturnal attractiveness."

For that reason, party-seekers, DJs and musicians have been fleeing Paris for years.

"The migratory movement toward Berlin is absolutely colossal," said Eric Labbe, a concert organizer and record store owner who was a co-author of the nightlife petition. With unpredictable police closings and increasingly stringent sound restrictions on musical venues, Labbe said, "it's incredibly complicated to find places to play."

Anouar Hajoui, a French hip-hop DJ known as Cut Killer, said he all but gave up performing here several years ago. "There's stuff going on," he said, "but not that much."

Just after midnight on a recent Friday, though, there was too much going on - too much noise, neighbors said - outside the Pop In bar, just up the way from the Zero Zero. There had been a complaint.

"This is a mess," a police officer told the bar's staff, standing at the curb amid a crowd of young smokers, carousers and various other disturbers of the peace.

Later, one of the owners was at the door, imploring patrons to keep their voices down and to leave their drinks behind if they wished to go outside.

Promoted
Listen to the latest songs, only on JioSaavn.com
"We're not allowed to do anything anymore in this country," a young man objected.

But he shot a sly look at his friends, tucked his beer inside his coat and slipped through the door out into the street.