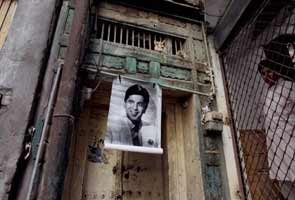 Islamabad: Eight decades after Bollywood icon Dilip Kumar left his ancestral home near the famous Qissa Khwani Bazar in Peshawar city, Pakistani authorities are in the final stages of acquiring the crumbling building to restore it as a national heritage site.

Tucked away in a corner of Doma Gali in Mohalla Khudadad, the home with an elaborately carved green doorway has few outward signs that set it apart as the place where Dilip Kumar was born as Muhammad Yusuf Khan on December 11, 1922.

The son of a prosperous fruit merchant, Lala Ghulam Sarwar, the future matinee idol spent several years of his childhood in the home located near the Qissa Khwani Bazar or the "Market of Storytellers," where travellers and traders from across Central Asia gathered to swap tales.

In December last year, Mian Iftikhar Hussain, the Information Minister of Khyber-Pakhtunkhwa province, announced plans to acquire the ancestral homes of Bollywood legends Dilip Kumar and Raj Kapoor in Peshawar so that they could be preserved as national heritage sites. Officials said the move to acquire Dilip Kumar's home was in its final stages.

"The government of Khyber-Pakhtunkhwa is negotiating for purchasing Dilip Kumar's house with the present owner. The negotiations are in the final stage," Shuaib Uddin, a senior official of the province's Information Department, told PTI.

"After the house is acquired, it will be preserved and maintained by the provincial government as it belongs to a legend of this soil. After the acquisition process is complete, a strategy will be put in place for its maintenance," Shuaib Uddin said.

Local residents said the two-storey building has three rooms and a courtyard on the ground floor, and two more rooms on the first floor. The rooms surrounding the courtyard have arched wooden windows and doors that were popular at the turn of the last century.

Ikramullah Khan, the current owner of the property, uses the rundown building to store goods that he sells at a nearby hosiery store. Khan said he had never watched any of Dilip Kumar's movies but was happy that the government intended to preserve the home.

"I had demanded Rs 5 crore but the government has agreed to pay Rs 3 crore. I'm hoping everything will be settled soon," Khan told PTI.

In recent days, several other persons have emerged to claim that they own the property. Local residents said some of these persons were motivated by the huge amount that authorities are expected to pay for the house.

However, Khan said he had documents to prove his ownership of the property. "Dilip Kumar's father gave the house to his brother-in-law Yusuf Qureshi in 1943 and Qureshi sold it the following year. I bought the house in 2005," he said.

Local residents said several elderly persons in their eighties remembered Dilip Kumar and his participation in school dramas. Others had met him when he visited Peshawar twice in the 1980s. A shop selling fried eatables near the actor's ancestral home is adorned with several photos of Dilip Kumar in his youth.

In a recent post on his blog, the 89-year-old actor wrote that he was moved by the decision of Pakistani authorities to preserve his childhood home. He said he had many memories of Peshawar, where he received his "first lessons in story-telling."

"I am at once full of fond remembrances of my parents, grandparents and numerous uncles, aunts and cousins who filled the house with the sounds of their chatter and hearty laughter," Dilip Kumar wrote.

"I have lovely memories of Qissa Khwani Bazar, where I received my first lessons in story-telling, which later provided the impetus to choose meaty stories and scripts for my work," he said.

Promoted
Listen to the latest songs, only on JioSaavn.com
Raj Kapoor, the son of acting legend Prithviraj Kapoor, too was born in Peshawar in 1924. The top floor of Prithviraj Kapoor's five-storey house at Dakhi Nalbandi, Peshawar's highest point, collapsed years ago but 60 rooms still survive.