"It is as if we are electing a Prime Minister in place of Narendra Modi," Asaduddin Owaisi said. 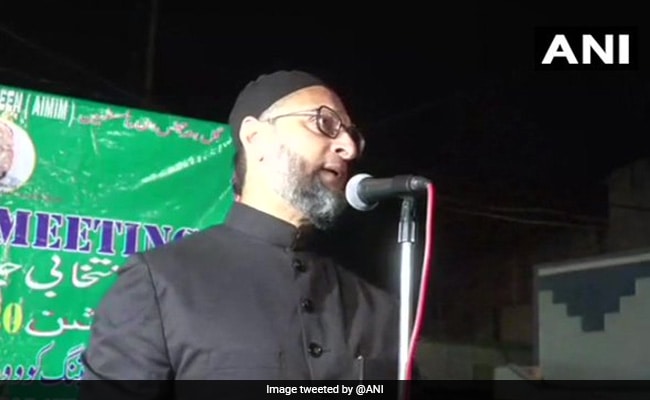 Speaking in the city on Saturday, Asaduddin Owaisi said it didn't look like a Hyderabad election anymore.

Taking a dig at the BJP for deploying its biggest leaders for a mere municipal election in Hyderabad, AIMIM chief Asaduddin Owaisi has said "the only person left to campaign in the city was US President Donald Trump".

Addressing a public rally at Hyderabad's Langer House on Saturday, the All India Majlis-e-Ittehadul Muslimeen (AIMIM) leader said it didn't look like a Hyderabad election anymore, but one to elect a Prime Minister.

"The Hyderabad election has been treated in such a way that it seems Hyderabad's people are going to pick a new wazir-e-azam (Prime Minister). Someone calls me Jinnah...some say rubbish things and lie," Mr Owaisi said.

"The BJP is calling its big ministers and Chief Ministers. Now only Donald Trump is left to campaign for Hyderabad's municipal elections. You call him, too, but nothing will matter. Inshallah, Majlis (AIMIM) will succeed," he said.

Hype around #GHMCElections2020 so much that it would seem #Hyderabad is voting to choose @PMOIndia, so many top leaders have been brought in by #BJP that now only @realDonaldTrump is left to come & campaign, says @aimim_national chief @asadowaisi@BJP4Telangana@ndtv@ndtvindiapic.twitter.com/TSQJBzrB8S

The BJP has been parading all its top guns, from party national JP Nadda to Uttar Pradesh Yogi Adityanath, to campaign for the Greater Hyderabad Municipal Corporation Election scheduled for December 1. Even Union Home Minister Amit Shah is scheduled to attend various poll-related programmes in the city today.

Last Thursday, Mr Owaisi even challenged Prime Minister Modi to campaign for the elections to see how many seats his party, the BJP, wins.

The campaign has also turned quite vitriolic in the past few weeks, with the city police even having to intervene and warn politicians against communally sensitive speeches.

On his part, Telangana Chief Minister K Chandrashekhar Rao has appealed to Hyderabad's voters to keep "divisive forces" away and choose "progressive parties".

Huge Vaccine Wastage By States Till April 11, Most In Tamil Nadu: RTI