"I Refused To Remove My Dastar": Minister Shares 2010 US Airport Incident

The incident, Minister Hardeep Singh Puri said, had led to the current practice of self-pat check by Sikhs at international airports. 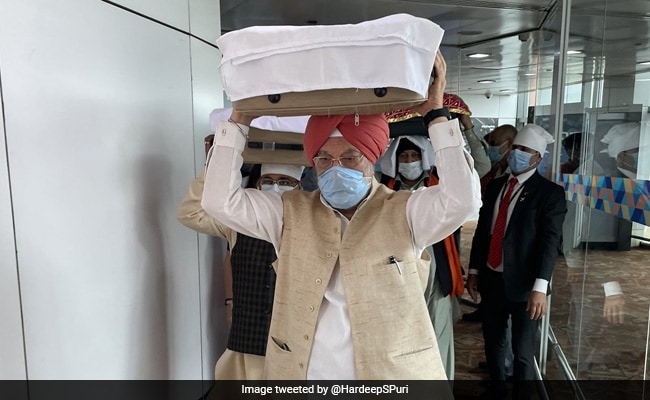 On the occasion of International Turban Day or Sikh Dastar Diwas today, Union Minister Hardeep Singh Puri posted a series of tweets about the importance of Dastar or turban for Sikhs. One of the tweets by the minister also praised Prime Minister Narendra Modi for his respect for Sikhism and affection for the members of the community.

"Dastar or turban is an article of faith and a symbol of pride and identity for us Sikhs," tweeted Mr Puri, as he recounted a 2010 incident at a US airport where he refused to remove his turban or let anyone touch it while being screened by immigration officials.

The incident, Mr Puri said, had led to the current practice of self-pat check by Sikhs at international airports.

Among those who praised the minister for protecting the Sikh identity was his wife, who said that Mr Puri wears turban proudly.

"Married to a practising Sikh. Truly understand the significance of a Dastar which @HardeepSPuri  Ji wears proudly & protects passionately. Have seen him take on the world for this article of Sikh faith," Lakshmi M Puri, former Assistant Secretary-General of the United Nations, said in a tweet.

In 2010, Mr Puri, who was then India's envoy to the UN, was pulled out at the airport in Austin, Texas and asked to undertake new procedures that involved pat down on his turban.

"The incident happened at the airport in Austin, Texas on November 13th. They told me 'We have new procedures that involve extra screening.' I went through the scanner...they took me to separate holding area...the security officer said he wants to pat down my turban...I refused...they came back after 20 to 30 minutes and apologized," Mr Puri told NDTV after the incident.

Indian government officials, on learning about Mr Puri's encounter, summoned US Deputy Chief of Mission to the Ministry of External Affairs (MEA) and lodged a strong protest over the incident.

New Delhi told Washington that the religious and cultural sentiments of diplomats had to be respected and even threatened to retaliate and withdraw the privileges of American diplomats here.

After India's protest, Hillary Clinton, who was the US Secretary of State at the time, herself promised a review of US policy.