On Kulbhushan Jadhav's Meeting With Wife, India Has 3 Conditions For Pak

Kulbhashan Jadhav, a former officer of the Indian Navy, was accused of spying and sentenced to death by a military court in Pakistan in April. India has rubbished the charges. In May the International Court of Justice in The Hague asked Pakistan to hold off the death sentence 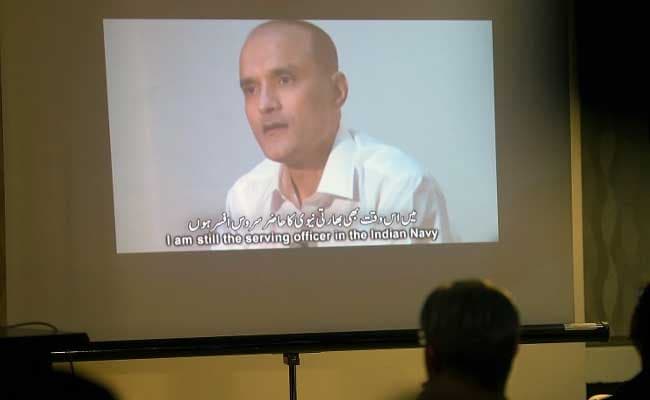 Kulbhushan Jadhav was sentenced to death in Pakistan for alleged espionage in April.

New Delhi: India has provided a conditional acceptance to Pakistan's offer to arrange a meeting between Kulbhushan Jadhav -- the former Indian Navy officer sentenced to death there for alleged espionage -- and his wife.

The foreign ministry said, "We have conveyed that the wife of Jadhav would like to travel with her mother-in-law for the meeting". But the ministry said India has laid down three conditions.

India has sought "sovereign guarantee from the government of Pakistan to ensure the safety and security of both. Also, during their stay in Pakistan they should not be questioned or harassed," said ministry spokesperson Raveesh Kumar.

"We have further asked that a diplomat from our High Commission in Pakistan, shall be allowed to accompany them at all times, including during the meeting," he added.

Mr Jadhav, a former officer of the Navy, was accused of spying and sentenced to death by a military court in Pakistan in April. India has rubbished the charges, saying he had been abducted from Iran, where he runs a business.

In May, following an appeal by India, the International Court of Justice in The Hague asked Pakistan to hold off the execution of Mr Jadhav till it reached its final verdict. The court also agreed with India that Pakistan had illegally withheld consular access to Mr Jadhav. The case is expected to be heard again in January.

Promoted
Listen to the latest songs, only on JioSaavn.com
But despite the verdict, India's multiple requests for consular access was not granted. Pakistan contends that "spies" are not entitled to such benefits.

India's request for a visa to Mr Jadhav's mother on humanitarian grounds was also ignored for months by Islamabad. Two weeks ago, Pakistan had said it would allow 46-year-old Mr Jadhav to meet his wife.