"You Are Root Cause Of Farm Law Problem": Amarinder Singh To Badals

Why did you not talk to farmers before the Centre thrust the draconian laws on farmers, Amarinder Singh asked the Badal family of the Akali Dal. 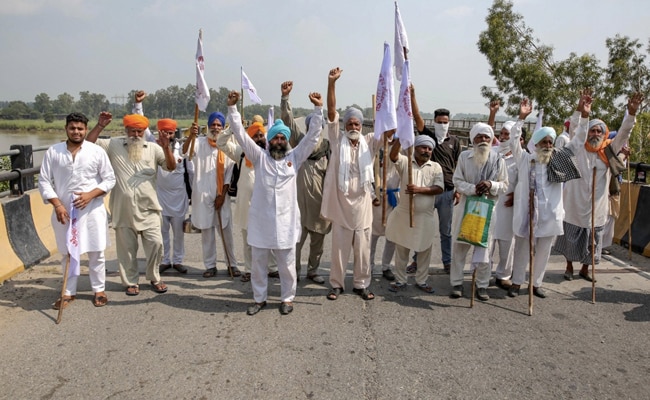 The Shiromani Akali Dali (SAD), under the family of senior leader Parkash Singh Badal and his politician children, is the root cause of the festering farmers' problem in the state and the country, Punjab Chief Minister Amarinder Singh said today.

Attacking his predecessor's clan for "thrusting" controversial new laws on people, the Congress leader accused his rivals of "colluding with the BJP" to promulgating the ordinances that imposed the three new farm laws last year.

"Considering that the Badals themselves were at the root of the problem, and the co-conspirators of the Centre's anti-farmer agenda, the Akalis neither deserve nor can expect any understanding or forgiveness from the farmers," said the Chief Minister, according to a Punjab Congress statement.

"The Akalis' apathy towards the farmers was evident from the fact that even now, instead of understanding and relating with the pain of the farmers, Sukhbir was refusing to simply recognise the protestors as farmers and was insulting them by alleging that they owed allegiance to other political parties, including the Congress," he said referring to Sukhbir Singh Badal, former Deputy Chief Minister of the state and son of former Chief Minister Parkash Singh Badal.

Thousands of farmers have been protesting in Punjab, Haryana, and around Delhi since three laws were brought in by the Centre: Farmers' Produce Trade and Commerce (Promotion and Facilitation) Act, 2020, the Farmers' (Empowerment and Protection) Agreement on Price Assurance and Farm Services Act, 2020 and the Essential Commodities (Amendment) Act, 2020.

The laws were passed by Parliament during last year's Monsoon Session. Weeks later, in September, the SAD quit the NDA in protest. It was the BJP-led alliance's oldest ally till then. Harsimrat Kaur Badal, the former SAD Chief Minister's daughter, resigned as Union Food Processing Minister.

Recently, SAD decided to set up a panel to hold talks with the state's angry farmers.

Ridiculing the move, Mr Singh today said no overtures could absolve the Badals of their responsibility in thrusting the draconian and undemocratic farm Laws on the farming community. He also termed it a desperate measure to woo Punjab's voters ahead of the 2022 Assembly polls, according to the Congress statement.

"Why did they not talk to the farmers before allowing their partners in the NDA to bring in the black laws?" he asked.