"It is regrettable that over the last five years, the Yogi Adityanath government has not only built crematoriums in Uttar Pradesh, but also made arrangements to dispatch many people there," said the AAP chief, whose party is contesting all 403 seats in UP. 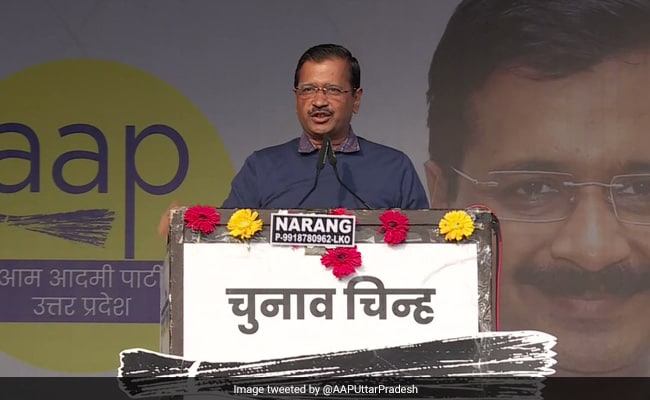 Arvind Kejriwal has been raising the poll pitch in Uttar Pradesh.

Aam Aadmi Party chief Arvind Kejriwal ripped into the Yogi Adityanath government today,  accusing it of acute mismanagement during the second wave of the pandemic and being responsible for the huge number of deaths in Uttar Pradesh. The state did the "worst Covid management in the world," Mr Kejriwal said at a massive rally in Lucknow today, ahead of the assembly elections that are just weeks away.

"It is regrettable that over the last five years, the Yogi Adityanath government has not only built crematoriums in Uttar Pradesh, but also made arrangements to dispatch many people there," said the AAP chief, whose party is contesting all 403 seats in the state.

In a cover-up exercise, the state is now spending millions on advertisements, he said. "The UP government had given 10-page advertisements in US magazines, splurging the hard earned money of people," he alleged.

"In 2017, the BJP's tallest leader had said if 'kabristans' (cemeteries) are made in Uttar Pradesh, then 'samshans' (crematoriums) should also come up," Mr Kejriwal was quoted as saying by news agency Press Trust of India in an apparent reference to Prime Minister Narendra Modi.

"Unfortunately, Yogi Adityanath over the past five years only constructed crematoriums and made arrangements to send a large section of citizens there," added Mr Kejriwal, whose party is also trying to expand its footprint in Goa in the coming elections.

Taking a jibe at the UP government, Mr Kejriwal said it put up 850 hoardings in the national capital, while his government had only 108 hoardings erected in Delhi.

"Sometimes, people wonder if they are contesting elections in Uttar Pradesh or Delhi," he mocked.

The AAP chief said while his rivals are good at "constructing graveyards and crematoriums", he knows "how to get schools and hospitals built".

"I get it done in Delhi. Likewise, I will get it done in Uttar Pradesh," said the  Delhi Chief Minister, who is making a development pitch in Punjab too, showcasing his government's work in Delhi.

"Wasted 22 Years In Congress...": Assam's Himanta Sarma On BJP And His Ideology